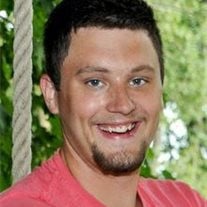 Dodgeville - Wyatt Dustin Caygill, age 17, of Dodgeville, died on Sunday, September 23, 2012 as a result of injuries sustained in an automobile accident. He was born in Boscobel, WI on Nov. 12, 1994 the son of Teri Luckey and Matt Caygill. Wyatt was a Senior at the Dodgeville High School. His passion was industrial arts, and had aspirations for underwater welding. He was planning to attend MHTC and then a Florida underwater welding school after graduation. The eldest brother of Cameron, Masen, and Chandler, Wyatt wasn't afraid to pave the way and had a fearless aspect on life. A great debater, Wyatt wouldn't back down from what he believed in. He made friends fast and left everyone he met in awe. Quick to smile and offer a punch line where needed, he supported and helped anyone he could. He looked forward to vacations every summer, and could always be found with a book in his hands. Wyatt loved easily and often, always the first to snuggle a baby, help a friend or care for animals especially his family dogs, Butters, Mazie, Apple and Tedward. Wyatt is survived by his parents, Teri Luckey (Rick Line), of Dodgeville and Matt Caygill of Stanley; his three brothers; his grandparents, Jane Luckey of Dodgeville, Royce (Barb) Luckey of Hartford, SD, Nancy Caygill of Dodgeville; his uncles, Troy (Shawna) Luckey of Linden, Tory (Lisa)Luckey of Lancaster; his aunts, Traci Luckey (Todd Kane) of Lancaster, Mandy Jo (Gernert) Ames of Dubuque, IA, and also many other aunts, uncle, cousins and friends. He is preceded in death by his great grandmother, Ruth Stivarius, grandfather Thomas Caygill, and special uncles Keith Stender and Brad Caygill. Funeral services will be held at 11:00 a.m. on Thursday, September 27, 2012 at GRACE LUTHERAN CHURCH in Dodgeville. Private family inurnment will be held at a later date. Friends may call from 4:00 p.m. until 8:00 p.m. on Wednesday at the GORGEN-McGINLEY & AYERS FUNERAL HOME in Dodgeville and from 10:00 a.m. until time of services on Thursday at the church. In lieu of flowers, memorials are appreciated.

Dodgeville - Wyatt Dustin Caygill, age 17, of Dodgeville, died on Sunday, September 23, 2012 as a result of injuries sustained in an automobile accident. He was born in Boscobel, WI on Nov. 12, 1994 the son of Teri Luckey and Matt Caygill.... View Obituary & Service Information

The family of Wyatt Dustin Caygill created this Life Tributes page to make it easy to share your memories.

Send flowers to the Caygill family.