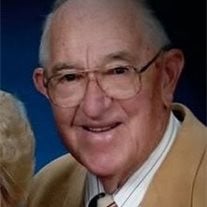 Mineral Point - Winford "Butch / Mose" Moseley passed away quietly August 15, 2013. Butch was born April 4, 1921 in Eagletown, OK and graduated from high school in Wright City, OK, where he met the love of his life, Georgia Taylor. Butch and Georgia were married July 22, 1942. Butch was a member of the volunteer fire department in Oklahoma and served in the Oklahoma National Guard prior to enlisting in the U.S. Navy. He served on the aircraft carrier USS Prince William until his discharge in 1945 in Hollister, CA. Butch was an active member of the Mineral Point Fire Department until he retired. His employment with the Mineral Point Postal Service provided him with the opportunity to build, and place, over 1,000 bluebird houses all over Iowa County (as well as the homesteads of Presidents John F. Kennedy, Lyndon B. Johnson, Jimmy Carter and Bill Clinton. "Mose" was an active member of the Congregational United Church of Christ in Mineral Point until just recently. Butch was also an avid hunter and fisherman and enjoyed many hours spent with his family. He was preceded in death by his mother and father as well as his all of his brothers and one sister. His wife Georgia passed away July 21, 2011 (one day shy of their 69th wedding anniversary). Butch is survived by his son Travis (Trish Salvage) Moseley of Gotham; a daughter Joan (Don) Mundth of Mineral Point, grandchildren, Scott (Lynelle) Moseley and their two children Joseph Winford and Jaci Moseley of Darlington, Tammy (Rick) Peters with daughters Emily and Molly of Madison, Bryan (Mesha) Stevens of Phoenix City, AL and his children Christopher and Melissa Stevens of Glauburg, Germany and Jim (Angela Savasta) Palmer of Wauwatosa along with a special nephew Bernie Ortiz of Madison. Butch is also survived by his step-children and grandchildren Jim Mundth, Jennifer Hesselink-Mundth, Jessica, Cortney, Johnny, Zach and Tyler. He leaves behind many nieces and nephews, and will be greatly missed by all who had the pleasure of knowing him. Funeral Services will be held on Tuesday, August 20, 2013 at 2:00 p.m. a the Congregational United Church of Christ in Mineral Point. Pastors Beryl Melcher and Daniel Yeazel will officiate. Burial will be in Graceland Cemetery with full Military Rites accorded by the Mineral Point VFW and American Legion. A visitation will be held on Monday, August 19, 2013 from 4:00 - 8:00 p.m. at the GORGEN FUNERAL HOME in Mineral Point, and on Tuesday from 1:00 - 2:00 p.m. at the United Church of Christ. A masonic Service will be held on Monday evening at 7:30 p.m. IN LIEU OF FLOWERS, FAMILY IS REQUESTING DONATIONS TO THE MINERAL POINT RESQUE SQUAD OR MINERAL POINT MASONIC LODGE #1.

The family of Winford C. Moseley created this Life Tributes page to make it easy to share your memories.

Send flowers to the Moseley family.