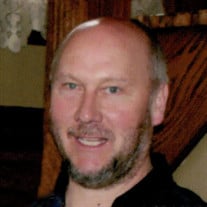 Dodgeville - William “Bill” Anderson, age 58, of Dodgeville, passed away at home, on Sunday November 29, 2020, with his wife and children by his side, after a three and a half year battle with cancer. Bill was born on March 30, 1962 in Dodgeville, son of the late Vernon and Dorothy Anderson. Bill grew up on a farm in Highland and continued to enjoy spending time at the farm: hunting, 4-wheeling, and keeping up his trails. He continued his passion for agriculture and auto mechanics, in the past working at Murn’s, Weaver Auto Parts, and most recently, NAPA Auto Parts. Bill married Amy Watson Anderson on June 26, 1993, after a “few years” of dating. They welcomed Casey (Brent Carcamo) in 1995 and Tanner in 1998. Bill was a great husband and father and will be deeply missed. Creativity and being mechanically minded was a big part of Bill. He was a self taught mechanic, carpenter, and all around handy-man, there wasn’t anything he couldn’t figure out or fix. Bill was also an avid player of volleyball and enjoyed watching volleyball games when he wasn’t playing. Bill is survived by his wife Amy; along with their two children Casey and Tanner; his protector/friend Shadow; his siblings Donna (Curt) Peterson, Mary Jane Riemenapp, Susan (Lynn) Phillips and Charles (Annette) Anderson; his mother and father in-law Evelyn and Gerry Watson; sisters-in-law and brother-in-law Jane Watson, Barb Watson, and David (Linda) Watson; further survived by many aunts, uncles, nieces, and nephews. Bill was preceded in death by his mother, his father, his grandparents and his nephew Derek Riemenapp. A Public Visitation will be held from 4:00 p.m. until 8:00 p.m. on Thursday, December 3, 2020 at the GORGEN-McGINLEY & AYERS FUNERAL HOME in Dodgeville where masks are to be worn during the duration of your visit inside of the funeral home and that you practice proper social distancing guidelines. Due to COVID restrictions, a Private funeral service will be held on Friday at Otter Creek Church in Highland. Family and friends are invited to attend burial service after the funeral at Otter Creek Cemetery at 11:30 a.m. Pastor Ramona Orton will officiate. The family would like to extend thanks to Agrace hospice services, especially Nicole and Jessica; their neighbors Terry, Tom, Molly, Nick, and Nancy for all their help; Rich and Marla for their understanding during the duration of his illness; and all the family and friends who kept Bill in their thoughts and prayers.

The family of William V. "Bill" Anderson created this Life Tributes page to make it easy to share your memories.

Send flowers to the Anderson family.