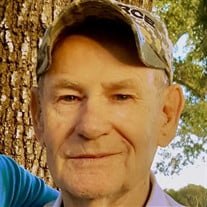 Mineral Point - William Beryl Reynolds, Jr. (Bill) of Mineral Point, WI. died Thursday, February 4, 2021 at the age of 86 due to complications from cancer. Bill was born in Knoxville, Tennessee’s Ramsey Community to William Beryl and Beula Agnes Reynolds. Bill proudly served in the United States Air Force for 30 years, stationed in over twelve locations, including overseas at Tan Son Nhut Air Base, Vietnam; Lindsey Air Station, Wiesbaden Germany; and Clark Air Base, Philippines. After his retirement from the United States Air Force in 1984, Bill continued working in civil service until his second retirement in November, 2002. Bill is a lifetime member of the Veterans of Foreign Wars, American Legion and Disabled American Veterans. He also served as Commander of the Mineral Point VFW Post 7629. Bill was an avid fan of the Tennessee Volunteers and the Dallas Cowboys. He enjoyed taking pictures, especially of his family and his pets, and e-mailing them to his lifelong friends. He played the lottery almost every day and became a favorite with employees at the local convenient stores. Bill is survived by his wife of 61 years, Virginia A. Reynolds (Berg), of Mineral Point, WI; son William D. Reynolds (Pamela) of Allen, TX; daughter Rhonda K. Joyner (Mark) of Brookfield, WI; grandchildren Amanda Leigh Wrenn (Chris); Grace Marin Reynolds; Justin Michael Joyner, Emma Catherine Reynolds and Taylor Nicole Joyner; and brother Curtis Reynolds; along with numerous nieces and nephews. Bill is preceded in death by his parents; his brother Bobby Reynolds; his sisters, Kathleen Reynolds, Lois Reynolds, Jeanne Vanover, and Maxine Hogan; and by his grandson Jared Case Joyner. Bill’s family would like to convey their sincere gratitude for the kindness expressed by family and friends, and especially to the medical staff and employees of St. Mary’s Hospital in Madison and Agrace Hospice in Fitchburg for all they did to make Bill as comfortable as possible during his time at their facilities. Due to Covid protocols, a celebration of life will be held at a later date for family and friends. In lieu of flowers, the family requests donations be made in honor of Williams B. Reynolds, Jr. to a favorite charity of your choice.

The family of William B. Reynolds, Jr. created this Life Tributes page to make it easy to share your memories.