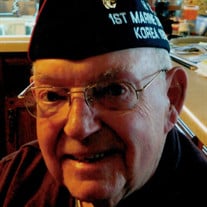 Dodgeville – William J. McKinley, age 88, of Dodgeville, passed away peacefully surrounded by his loving family at his home of 62 years on Sunday, February 16, 2020. William was born on April 5, 1931 in Dodgeville, son of Ellery and Bertha McKinley. He celebrated his 65th wedding Anniversary with the love of his life, Lois, on February 5, 2020. Together they were blessed with five children, David (Patti) McKinley, Patricia (Jack) Manzella, Anne (Scott) Russell, Mary Cockerham, Judy (Steve) Zautke; dearest grandfather of ten grandchildren, Krystle, Brandon, Matthew, Alexander, Mandy, Michael, Brockton, Aaron, Karissa and Dawson. Along with seven great-grandchildren, Alexa, Berklee, Gavin, Ashton, Landon, Blair and Bentley. Bill is further survived by his brothers Richard McKinley and James (Marilyn) McKinley; his sister-in-law Eileen McKinley; many nieces, nephews, other relatives and friends. He was preceded in death by his parents, his brother Edward McKinley, his sister-in-law Amy McKinley and his great grandson Gavin Russell. Bill proudly served in the United States Marine Corps during the Korean War. A true Patriot, receiving two purple hearts in Combat, the family’s greatest hero! Bill was employed with Jewel Tea Company for 26 years. He often was the top salesman, receiving many awards and accolades. One of his greatest enjoyments was spending time with family and friends at their cabin of 50 years, which included fishing, hunting, boating and playing euchre. Bill was a diehard Badgers and Packers fan and could often be seen decked out in his red or green and gold attire on weekends cheering them on whenever he could. The family would like to extend a heartfelt thank you to St. Croix Hospice and Christian Home Servants for their loving care. A Mass of Christian Burial will be held at 12:00 p.m. on Saturday, February 22, 2020 at ST. JOSEPH’S CATHOLIC CHURCH in Dodgeville. Friends may call from 11:00 a.m. until 11:45 a.m. on Saturday at the church, where a family eulogy will be said at 11:45 a.m. Military rites will be held after Mass at ST. JOSEPH’S CATHOLIC CHURCH by the Dodgeville Veterans. In lieu of flowers, memorials may be made to St. Croix Hospice or St. Joseph's Catholic Church in Dodgeville. Heaven has received a special angel! You left us beautiful memories. Your love is still our guide, and though we cannot see you, you are always by our side. Always and forever….

Dodgeville &#8211; William J. McKinley, age 88, of Dodgeville, passed away peacefully surrounded by his loving family at his home of 62 years on Sunday, February 16, 2020. William was born on April 5, 1931 in Dodgeville, son of Ellery and Bertha... View Obituary & Service Information

The family of William J. McKinley created this Life Tributes page to make it easy to share your memories.

Send flowers to the McKinley family.