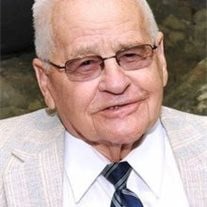 Dodgeville - William Raymond "Bill" Heun, age 91, of Dodgeville, passed away peacefully on Wednesday, May 31 at Dove West Healthcare in Eau Claire, WI. Bill was born Sept. 18, 1925 at St. Joseph Hospital in Dodgeville, WI son of Raymond and Anna (Esch) Heun. Bill grew up on a farm outside of Dodgeville. He attended Dodgeville Schools graduating in 1943. He married J. Eileen Bowers in Montfort on May 26, 1951. Bill and Eileen made their home and raised their 2 children, John and Tari in Dodgeville. Bill was a long time employee of Iowa County Highway Department becoming Shop Foreman prior to his retirement. Coming out of retirement he worked in maintenance at Dick's Supermarket so he and Eileen could spend winters in Florida. In his later years, he enjoyed the company of his bible study group: Mary, Ted, Larry and Potsie. His favorite past time has always been going for car rides in the country. Bill is survived by his daughter Tari (Joe) Kennedy of Eau Claire; his daughter-in-law Barb Heun-Meudt of Dodgeville; his sisters JoAnne and Mary Heun of Madison; his grandchildren Jennifer (John) Palzkill, Shaun (Kristi) Kennedy, Jason (Jessica) Kennedy, Neesha (Adrien Cruz) Heun, Tara (Tyler) Husom, Cassie (Sean Storin) Heun; 12 great grandchildren; 1 step great-grandchild. He is further survived by his sister-in-law Pat (Art) Benisch of Windsor, WI, several nieces and nephews and special friends Gail Heun and Margaret Lawinger. Bill was preceded in death by his wife J. Eileen, his son John, 2 still born children, his parents Anna and Ray Heun, his mother and father-in-law Cleo and Clara Bowers, brother-in-law Ron Bowers, nephew Jeff Bowers and his aunt Katherine Heun. A Mass of Christian Burial will be celebrated at 11:00 a.m. on Monday, June 5, 2017 at ST. JOSEPH'S CATHOLIC CHURCH in Dodgeville. Monsignor Daniel Ganshert will officiate. Burial will be held in St. Joseph's Cemetery. Friends may call from 2:00 p.m. until 5:00 p.m. on Sunday and from 9:30 a.m. until 10:30 a.m. on Monday at the GORGEN-McGINLEY & AYERS FUNERAL HOME in Dodgeville. All are welcome to attend and celebrate Bill's life with reception to follow at St. Joseph's Catholic School.

The family of William R. Heun created this Life Tributes page to make it easy to share your memories.

Send flowers to the Heun family.