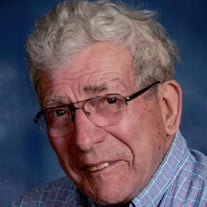 Dodgeville – William “Bill” Harland James, age 90, went to heaven to be with the love of his life on Friday, September 4, 2020, Bill was born on August 29, 1930 to the late Harland and Blanche (Wilson) James. He attended Gold Mine Elementary school through 8th grade and then went to Dodgeville High School where he played football and was active in FFA. Bill graduated in 1948. Bill was proud to share that his first home was the Wilson farm, that is now part of Governor Dodge State Park, before moving to the family farm. As a young boy, he enjoyed going to dance halls, and showing beef and hogs at the county fair. Bill was a member of the Iowa County Youth agency, Farm Bureau, Pork Producers (where he was president for a term), 4-H leader for Wayside Hustlers for 18 years, as well as President of the 4-H Leaders Association. Bill helped start the first Dairy breakfast that was held at Centennial Park, where he spent 2 nights guarding the meat. Bill also enjoyed the neighborhood card club that had the same 6 couple for 20 years. He was proud of the woodworking that he did, but mostly proud of the doll beds he made for his granddaughters and neighborhood girls. Bill also worked at FS in Dodgeville when he took a break from farming, which didn’t last long. He worked at Lands’ End before retiring at the age of 78. Bill met the love of his life, Helen Murray, in May of 1956. They were married on November 3, 1956. In February, 1960, with 2 of their daughters, they moved and farmed on the Forseth farm north of Dodgeville where they raised their7 children. He was happiest when he was at family gatherings and enjoyed the quiet when everyone was gone. After Helen’s death in 2004, Bill married Cleo (Miess) on July 26, 2012 and gained more children, grandchildren and great grandchildren. He took his first plane ride when he was 82 when he and Cleo along with Cleo’s daughter Carla went to Maine to see Cleo’s daughter and son-in-law. Cleo preceded him in death in 2018. Bill is survived by his 7 children; Cleo (Dick) Perkins, Fruita CO, Janet (Kevin) Kirschbaum, Dodgeville, Carl (Patty), Argyle, Jill (Dave) Elliott, Prescott Valley, AZ, Jeff (Julie), Dodgeville, Cheryl (Dave) Spink, Blanchardville, Curt (Amy), Highland. He is also survived by his 15 Grandchildren, 16 Great Grandchildren, plus twins that are due in the spring. Bill is further survived by his siblings; Millie (Beauford) Blabaum, Dick (Judy), Dave (Betty), Marie (Ray) Brokish, and Cornie’s wife Judy. He is also survived by his in-laws- Marion Lewis, Roger (Debbie), Robert (Mary Jo), Rita (Clyde) as well as Cleo’s siblings, children, grandchildren and great grandchildren, along with many nieces, nephews, other relatives and friends. Bill was preceded in death by his parents, his wives, his brother Corny, brothers and sister-in-law Paul and Dolores Murray and Jerry Lewis, his infant great-great grandson and his mother and father-in-law Robert and Beulah Murray. Private Funeral Services will be held on at the DODGEVILLE UNITED METHODIST CHURCH. Pastor Jim Droste will officiate. Burial will be held in East Side Cemetery in Dodgeville. Friends may call from 4:00 p.m. until 8:00 p.m. on Wednesday, September 9, 2020 at the GORGEN-McGINLEY & AYERS FUNERAL HOME in Dodgeville. Due to Wisconsin’s public health mandate, masks are to be worn during the duration of your visit inside of the funeral home and that you practice proper social distancing guidelines. In lieu of flowers, donations can be made to St. Croix Hospice, Platteville or the Dodgeville United Methodist Church. A special thank you to Sienna Crest and the compassionate care that he received there. Also thank you to St. Croix Hospice for their support and care. A special thank you to Jodi, his darling aide.

The family of William H. "Bill" James created this Life Tributes page to make it easy to share your memories.

Send flowers to the James family.