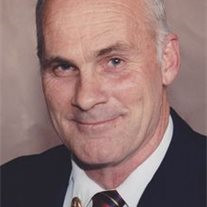 Mineral Point - William (Bill) J. Finley, loving father, grandfather and brother, went on ahead of us to dwell in the house of the Lord on Friday, October 18, 2013. Bill, age 65, of Mineral Point died peacefully at home with family by his side. He was a champion warrior who fought a courageous battle with cancer. Bill was born on November 6, 1947 in Dodgeville to James and Joyce (Wasley) Finley. He graduated from Mineral Point High School and not long after married Mary Nondorf of Highland. They lived there shortly before moving their young family to Mineral Point, where he and his father began a family-owned business that is now into its third generation with his son Troy. Bill was active in the Mineral Point Fire Department and served one term as chief. He was the Iowa County Coroner for many years, up until the time of his illness. He especially enjoyed spending his free time with his family at the farm. He was an active member of the Congregation of Ss. Mary's & St. Paul and was presented with the 2005 Outstanding Citizen Award from the American Legion. Bill is survived by his five children, Michelle (John) McGuire and their children Katie, Kelsi and John; Deb (Tim) Riley and their children Jake and Bailey; Mark (Andrea) Finley and their children Natalie and Grady; Tina (Kyle) Carey and their children Roen and Liam; and Troy (Cortney) Finley and their children Kit and Carter. Bill is further survived by one great-grandchild, Bryliee; two sisters JoDean (Art) Linscheid and Diane (Ed) Budzinski; one brother Doug (Helen) Finley; as well as many aunts, uncles, nieces, nephews and friends. Bill was preceded in death by his parents, nephew Craig Finley, and special Uncle Nate Blabaum. Throughout Bill's journey to eternal life he was blessed with wonderful family and friends. We would like to thank them, and in addition, U. W. Hospital, Dean Clinic, Upland Hills Health and Upland Hills Hospice. You all made good memories for us. A Memorial Mass will be held at 11:00 A.M. on Saturday, October 26, 2013 at the Ss. MARY & PAUL CATHOLIC CHURCH in Mineral Point. Father Monte Robinson will officiate with burial in St. Paul's cemetery. Friends may call on Friday from 4:00 a.m. until 8:00 p.m. at the church and on Saturday from 10:00 a.m. until time of Mass at the church.

Mineral Point - William (Bill) J. Finley, loving father, grandfather and brother, went on ahead of us to dwell in the house of the Lord on Friday, October 18, 2013. Bill, age 65, of Mineral Point died peacefully at home with family by his side.... View Obituary & Service Information

The family of William J. Finley created this Life Tributes page to make it easy to share your memories.

Send flowers to the Finley family.