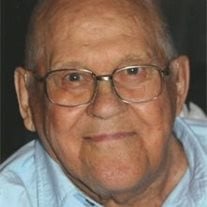 Dodgeville – William J. Haag, age 91, of Dodgeville, died on Tuesday, October 21, 2014 at Upland Hills Nursing & Rehabilitation Center in Dodgeville. Bill was born June 16, 1923 in Perry Township to Albert and Mary (Sutter) Haag, He attended Spring Valley School and began farming in 1940. He married Ethel Mickelson at Holy Redeemer Catholic Church in Perry, WI. Bill and Ethel farmed in Forward. He worked at Phillipson Implement in New Glarus from 1961 to 1964. They then returned to farming in Forward until 1976, when they moved to Dodgeville. Bill worked at Singer Lumber Company until retiring in 1988. In retirement, Bill continued carpentry work at all of his children's homes and for friends. He had a beautiful singing voice, loved playing euchre with family and friends, giving the grandchildren rides on the hay wagon while driving 'Annabelle' and watching the Brewers. He had an abundant garden that he shared with everyone. Bill was a kind and gentle man with strong faith, intellect, integrity, and a generous heart. Bill is survived by his wife Ethel and 11 children: Judy and Allen Lidtke; Steve (Shari) Haag; Karen and Terry Johnson; Ron and Dee Haag; Sheila and Bob Carmichael; Greg and Louann Haag; Bruce and Mary Haag; Patty and Bob Benedict; JoAnn and Jim Day, Mark and Tammy Haag and Scott and Jackie Haag. He is survived by 36 grandchildren and 36 + 2 babies to be great grandchildren. He is further survived by brothers Roman, Clement and Fritz Haag and sisters Lee Weber, Gladys DePrey, Terry Cavan, Kris Handel and Monica Vaguerio and their spouses. He was preceded in death by his parents, Arthur, Alban, Emma and Wallace Haag, Carl Weber, Mike Handel and Dan Cavan. A special thank you to all of the staff at Upland Hills Dialysis unit and all of the staff at Uplands Hills Health for their exceptional care for Bill. They are all wonderful people. A Mass of Christian Burial will be celebrated at 11:00 a.m. on Friday, October 24, 2014 at ST. JOSEPH'S CATHOLIC CHURCH in Dodgeville. Monsignor Daniel Ganshert will officiate. Burial will be St. Joseph's Cemetery. Friends may call from 4:00 p.m. until 8:00 p.m. on Thursday at the GORGEN-McGINLEY & AYERS FUNERAL HOME in Dodgeville and from 9:45 a.m. until 10:45 a.m. on Friday at the church. In lieu of flowers, the family suggests that memorials be made to the Upland Hills Health Dialysis Center, Upland Hills Nursing & Rehab Center or the St. Joseph's School Trust Fund.

The family of William J. "Bill" Haag created this Life Tributes page to make it easy to share your memories.