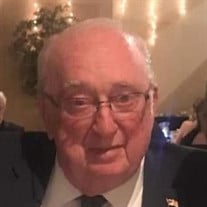 Mineral Point - William “Bill” Edward Schmitz, age 80, of Mineral Point, died on Monday, May 20, 2019 at Upland Hills Health in Dodgeville. He was born on June 11, 1938 in Mineral Point, a son of the late William H. and Margaret (Cunningham) Schmitz. He graduated from Mineral Point High School in 1958. On, January 9, 1960, he married Barbara Ann Jackson at St. Mary’s Parsonage in Mineral Point. He worked at Hannah Oil Company until 1981 when he took a position at Adam’s Company until his retirement in 1998. Bill was a member of Ss. Mary & Paul Catholic Church. He was a member of the Mineral Point Fire Department for 43 years and he was an honorary member of the department since 2006. He loved his role as the Captain of truck 107. The fire department and its men were a second home to Bill for many years. Bill and Barb were long time loyal supporters of Mineral Point athletics. Bill enjoyed following his grandchildren and great grandchildren in their various sports and music activities. He also enjoyed following the Wisconsin Badgers, Green Bay Packers and Milwaukee Brewers & Bucks. Bill loved spending time with his family. Bill and Barb spent 20 years camping at Lake Joy. It was the perfect family gathering spot. Nothing made Bill happier than being surrounded by his family sharing good times and making memories. They also enjoyed camping and taking trips with their dearest friends. Bill’s infectious smile was as big as his loving heart. Bill’s love touched everyone he came across. Bill is survived by his wife, Barb; his children and grandchildren; Bill (Sidney) and their children, Alexa (Luke) Lindsey, Rilee (Dan) Hammer and Alec, Brett (Michelle) and their children Bobby (Tara), Danielle (Erika), Daryll & Halie and Brenda (Kraig) Wasley and their children, Sierra (Kendrick) Eggers & Mariah (Mitchell) Whalen. Bill is survived by 9 great grandchildren; Everett, Liam, Dane, Wade, Hazel, Kinzlee, Jett, Indie and Maven, as well. He is also survived by his brothers, John (Mary) and Joe and sister, Janice Pittz, as well as, sisters-in-law, Helen and Marion Schmitz. Bill was preceded in death by his parents, his in-laws, Franklin and Grace, his sister, Kathleen (Stan), and brothers, Harold, Don (Margaret), Bernie (Marilyn), Ken, Curly, and sister-in-law, Marlene, brother-in-law, Ralph Pittz and many other relatives and friends. A Mass of Christian Burial will be celebrated at 11:00 a.m. on Friday, May 24, 2019 at Ss. MARY & PAUL CATHOLIC CHURCH in Mineral Point. Friends may call from 4:00 p.m. until 8:00 p.m. on Thursday and from 10:00 a.m. until 10:50 a.m. on Friday at Ss. MARY & PAUL CATHOLIC CHURCH in Mineral Point.

The family of William "Bill" Edward Schmitz created this Life Tributes page to make it easy to share your memories.

Send flowers to the Schmitz family.