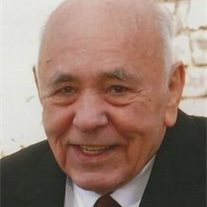 Mineral Point - Walter E. "Bud" "Wally" Harris, age 85, of Mineral Point passed away peacefully at his home on Saturday, May 9, 2015. Bud was born on October 10, 1929 in Ash Grove, MO the son of Edgar and Elouise (Baker) Harris. They moved from Ash Grove in 1934 and lived in the Willow Springs area for a time, then moved to Mineral Point. The family farm was just outside of Mineral Point at the end of Harris Rd. He graduated from Mineral Point High School in 1947. He went into the United States Navy as a SEABEE in 1947 until 1952. He worked in several utilities facilities but his long time work was at Wisconsin Bell which became ATT, retiring in December of 1980. Bud married Patricia McGettigan on September 22, 1956 in Baraboo and they moved to Monona and lived there for about 20 years, retiring to Spring Green. They spent the winters in Gulf Shores, AL for about 18 years until hurricane Katrina hit. They moved to Platteville for a time and to Dodgeville and finally to Mineral Point. Bud is survived by his wife of 58 years Pat; his two sons, Dan (Gina) Harris of Edgerton and Bill (Terri) Harris of Monona; his two daughters, Denise (Mark) Scullion of Monona and Bobette (Steve) Handel of Mineral Point; six grandchildren, Becky Maybee, Theresa Handel, Steve (Andrea) Handel Jr., Brandon (Megan) Scullion, Tyler (Rachel) Scullion and Jed (Jen) Schug; twelve great-grandchildren; his two sisters, Rosa Lee Dunbar and Debbie (Jeff) Bourgholtzer; his brother-in-law, Ralph Romero and his sister-in-law, Joyce Yeager Harris; he will be missed by many relatives and friends. He is preceded in death by his parents, his siblings Bill Harris, Patricia Prinslow, Barbara Romero, and his brother-in-law Jim Dunbar. A Celebration of Bud's Life will be held on Thursday, May 14, 2015 from 10:00 a.m. until 1:00 p.m. at the GORGEN FUNERAL HOME in Mineral Point. Inurnment will be at a later date in Graceland Cemetery. A Military Service will be held at 9:45 a.m. Thursday morning at the Gorgen Funeral Home.

Mineral Point - Walter E. "Bud" "Wally" Harris, age 85, of Mineral Point passed away peacefully at his home on Saturday, May 9, 2015. Bud was born on October 10, 1929 in Ash Grove, MO the son of Edgar and Elouise (Baker) Harris. They moved... View Obituary & Service Information

The family of Walter E. "Bud" "Wally" Harris created this Life Tributes page to make it easy to share your memories.