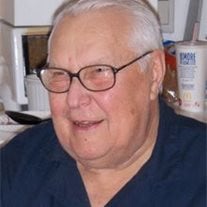 Dodgeville / Bloomington – Dr. Wallace W. Rogers, DVM, age 80, passed away surrounded by his loving family and special friend, Phyllis, on Sunday, December 2, 2012 at his Dodgeville home. Wally, better known as Doc, was born on Jan. 6, 1932 in the town of Glen Haven, Wis. to Dennis and Harriet (Hochhausen) Rogers. Wally graduated from Bloomington High School in 1949 and received his BS degree in elementary education from UW Platteville in 1953. He then spent 2 years in the Army as a trumpet player in the 4th Army Band. After his discharge, Wally taught in Bagley High School for two years before gaining admission to the veterinary school in Manhattan, Kansas. While teaching science at Bagley H.S. he started a student pep band and would play his trumpet with the students at sporting events. During college he played his trumpet in a band to support his family and cover tuition expenses. Doc graduated on June 4, 1961 from Kansas State University of Agriculture and Applied Science with a DVM degree. He, his wife Sally and then 4 children moved to Dodgeville where he had a 30 year career in large animal veterinary business. Doc was well known in Dodgeville for his willingness to help others, be it pulling you out of a snow bank or financially helping you start your business or purchase a home. Doc's smile and wave will be truly missed in Dodgeville. Wally is survived by a very special friend Phyllis Erickson; his eleven children, Rosanne Rogers, Denise Mingione, Paul Rogers, David (Nicki) Rogers, Dean Rogers, Dennis (Julie) Rogers, Joyce Rogers, Christine Rogers, Ellen (Jim) Martinson, Ralph (Beth) Rogers and Irene Rogers; and his thirteen grandchildren, Brian Latsch, Louie (Kathryn) Mingione, Anthony and Sarah Mingione, Isa and Kai Rogers, Chad Rogers, Max, Alex and Katherine Rogers, Ally Brennan, Abigail Martinson and Samantha Rogers. He is also survived by his sister Mary Jane Hermsen, nephew Dan (Julie) Hermsen, nieces Sue (Jim) Bausch, Jane (Greg) Patterson, several great and great-great nephews and nieces and step sons Steve (Gloria) and Darren King. Wally was preceded in death by his parents; infant sister Rose Ann; the mother of his eleven children, Sally Lu (Trine) Rogers; and his brother in-law Roy F. Hermsen. Funeral services will be held at 7:00 p.m. on Tuesday, December 4, 2012 at GORGEN-MCGINLEY & AYERS FUNERAL HOME, 400 East Grace Street, Dodgeville, where Military Rites will be accorded by the Dodgeville Area Veterans. Visitation will be held from 4:00 p.m. until time of services on Tuesday at the funeral home. Burial services will be held at 12:00 p.m. on Wednesday at the Charlotte Cemetery, CTH "VV", Glen Haven. The family would like to thank Upland Hills Hospice for their loving care and concern.

The family of Dr. Wallace W. Rogers created this Life Tributes page to make it easy to share your memories.

Send flowers to the Rogers family.