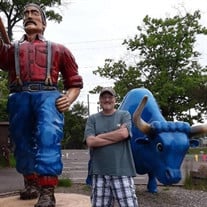 Friendship / Ridgeway – Wade William Venden, age 52, died on Tuesday, October 5, 2021, at his home in Friendship, WI. Wade was born on July 12, 1969. He was a beloved son of Curt and Gloria Venden, raised in the Dodgeville area. He was a happy and wonderfully mischievous child who exceeded expectations with anything creative he tried. After graduating from Dodgeville High School in 1987 he attended college at UW-Stevens Point and at UW-Madison. While in college he met Barb Fullmer and they were married in 1995. For many years, they moved around the United States. Later divorcing, Barb has remained close to Wade and to his family. Wade was a naturally gifted artist, writer, and musician playing in numerous bands with his brother, Lane. Wade was an accomplished banjo player, Mandolin player and drummer. In 2011, Wade met his beautiful wife Cristina. They were married in the Philippines and lived there a year before returning to Wisconsin. Wade and Cristina loved to camp and hike the woods of Wisconsin. They have a much beloved dog, Zoe. Wade enjoyed a simple life of being with the woman he loved, taking road trips, and relaxing by a campfire. Wade leaves behind his wife Cristina Venden, his parents Curt and Gloria Venden, his brother Lane (Kellee, Clayton, Adrianna) Venden, his mother-in-law Felisa Ampo, and a large extended family. A small family funeral will be held. There will be a Celebration of Life gathering for friends and family - date/time to be determined at a later date. In lieu of flowers, donations can be sent to Gorgen-McGinley & Ayers Funeral Home, 400 Grace Street, Dodgeville, WI.

The family of Wade William Venden created this Life Tributes page to make it easy to share your memories.

Send flowers to the Venden family.