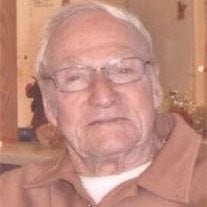 Dodgeville - Vivian B. "Viv" Durni, age 90, of Dodgeville, passed away peacefully on Sunday, February 26, 2012 at Upland Hills Nursing & Rehab Center in Dodgeville. He was a resident of Sienna Crest Assisted Living, Dodgeville. He was born on May 22, 1921 to Lloyd and Iva (Gribble) Durni in Lancaster. He attended Mifflin and Livingston schools, graduating in 1940. He received his bricklayer apprenticeship from the technical school in Madison. Viv married Ruth Jones on April 29, 1941, and they raised three children in Southwestern Wisconsin. Ruth preceded him in death on March 24, 1984. Viv was a bricklayer and Master stone mason from 1951 - 1972 owning his own business for several years. He then became a carpenter with the UW - Platteville and retired in 1984. He served with the U.S. Navy during W.W. II. Viv married Wilma (Leffler) Fritsch on June 20, 1988 and they lived in Cobb until moving to Dodgeville in 1998. They enjoyed dancing, playing cards, and traveling, spending winters in Gulf Shores, Alabama. Wilma preceded him in death on April 10, 2002. Viv was a boxer, fisherman and ball player in his younger years. He enjoyed golf, pool and watching sports. He was a caring and kind man with a warm heart. His greatest joy was spending time with his two families. He was also preceded in death by his parents, his daughter, Lois (Larry) Moe, his granddaughter, Jessica Richards, two brothers and sisters-in-law, Bernell "Bud" (Lucille) Durni and Meredith (Peggy) Durni. Viv is survived by his daughter, Sandra (Ted) Richards, of Madison; his son, Faun (Ellen) Durni, of Beaver Dam; 6 step-daughters, Bette (Keith) Syvrud and Gloria (Ralph) Novotny, of Brooklyn, Vicki (Douglas) Timmens and Tari Cooper, of Dodgeville, Chris (Jim) Williams, of Madison and Cindy (Harry) Cork, of Plain; 4 grandchildren; 8 great-grandchildren; 13 step grandchildren; 18 step great-grandchildren; 5 step great-great-grandchildren; and many nieces, nephews other relatives and friends. He is further survived by his favorite cat and companion, Lucky. Funeral services will be held at 6:30 p.m. on Thursday, March 1, 2012 at the GORGEN-McGINLEY & AYERS FUNERAL HOME in Dodgeville. Rev. Steven Kottke will officiate. Private family burial will be held in Rock Church Cemetery. Friends may call from 3:00 p.m. until time of services on Thursday at the funeral home. Military Graveside Rites will be held after the service and provided by the Dodgeville Area Veterans. The family suggests that memorials be made to the Vivian Durni Fund @ Sienna Crest in Dodgeville or to Upland Hills Hospice in Dodgeville.

Dodgeville - Vivian B. "Viv" Durni, age 90, of Dodgeville, passed away peacefully on Sunday, February 26, 2012 at Upland Hills Nursing & Rehab Center in Dodgeville. He was a resident of Sienna Crest Assisted Living, Dodgeville. He was born... View Obituary & Service Information

The family of Vivian B. "Viv" Durni created this Life Tributes page to make it easy to share your memories.