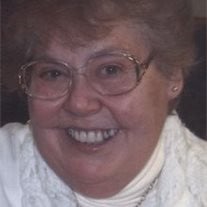 Dodgeville – Vicki K. Borne, age 61, of Dodgeville, passed away unexpectedly on Saturday, June 2, 2012 at St. Mary's Hospital in Madison. She was born on October 22, 1950 in Dodgeville, a daughter of Harry and Mildred (Hanko) Borne. She graduated from Dodgeville High School in 1970 and worked at Lands' End in customer sales for many years. Vicki was a member of the Iowa County Homemakers and loved going to garage sales, gambling, craft fairs and spending time with her nieces and nephews. She always put others ahead of herself. Vicki is survived by her mother, Mildred Borne, of Dodgeville; her fiancé, George Wallenkamp, of Highland; her eleven brothers and sisters, Jeff (Kris) Borne, Kris Halverson, Michael (Becky) Borne, Randy (Lisa) Borne, Steve (Chris) Borne, Jill (Joe) Bartman, Brian (Beth) Borne, Tracy (John) Sanders, Bill (Angie) Borne, Mary (John) Crook, Allison (Collin) Woodward, all of Dodgeville; many nieces, nephews and great nieces and nephews and a very special friend and niece, Haley Borne. She was preceded in death by her father, Harry Borne, her maternal grandparents, Herbert and Kathryn Hanko and paternal grandparents, Harry and Marilla Borne. Funeral services will be held at 11:00 a.m. on Wednesday, June 6, 2012 at GRACE LUTHERAN CHURCH in Dodgeville. Burial will be held in East Side Cemetery. Friends may call from 4:00 p.m. until 8:00 p.m. on Tuesday at the GORGEN-McGINLEY & AYERS FUNERAL HOME in Dodgeville and from 10:00 a.m. until time of services on Wednesday at the church. She gave until the end by being an organ donor. The only organ they won't be able to use is her heart. She had such a huge heart and used it so much on earth, its all used up. We Love You, Vicki.

Dodgeville &#8211; Vicki K. Borne, age 61, of Dodgeville, passed away unexpectedly on Saturday, June 2, 2012 at St. Mary's Hospital in Madison. She was born on October 22, 1950 in Dodgeville, a daughter of Harry and Mildred (Hanko) Borne. She... View Obituary & Service Information

The family of Vicki K. Borne created this Life Tributes page to make it easy to share your memories.

Send flowers to the Borne family.