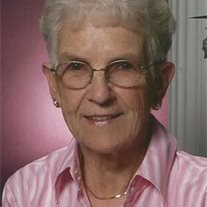 Dodgeville - Twila Marcella Rohowetz passed away on July 7, 2015 surrounded by her family at Bloomfield Nursing Home due to complications from a stroke just short of her 91st birthday leaving a very large void in the Rohowetz family. Twila was born August 16, 1924 to Severt and Ida Martin. She was the middle child of six children. She spent her childhood on the family farm northeast of Edmund, WI, telling of us tales of hardships during the Depression years and of skiing cross country on homemade skies to attend the Pine Grove country school. She was a housekeeper for the Strong family in return for room and board while going to high school in Dodgeville. During WW II, Twila worked for a time at the Badger Ordinance, making gunpowder. On August 28, 1943, she married Robert Rohowetz of Dodgeville and farmed alongside her husband for over 30 years. Besides milking cows, working in the fields and tending other livestock with her husband, she gave birth and raised 8 rambunctious children on the farm. After selling the farm they operated the Surge Milking Equipment in Dodgeville for many years until Robert's retirement. After Robert's death, Twila became the matriarch of her large family. She lead by example, hard work and hardly ever a cross word. She never interfered with her children's lives, letting them make their own mistakes in life but offering boundless love and encouragement regardless of the circumstances. Twila worked for over 25 years with the Lands' End Company retiring at the age of 85. She took great pride in her small house and extensive flower garden becoming a Master Gardener. She remained fiercely independent right up to the time of her stroke, driving herself around, bowling in 2 ladies leagues, and producing quilts for the weddings of her children and grandchildren. Even in her late years her neighbors would scold her for climbing on the roof of her house after a snow storm to clean it off. Her ever larger family of her children, spouses, girlfriend, grandkids and great grandchildren enjoyed her great holiday meals. We all enjoyed her handmade lefse, pasties and goulash, cinnamon rolls and other deserts. Twila especially enjoyed her Wednesday outings with her girlfriends to Tony's Tap. She was a lifelong member of St. Joseph's Catholic Church and its Choir and Altar Society, Uplands Gardening Club, the Iowa County Extension Homemakers and was a founding member of the Fennimore lodge of the Sons of Norway. Twila is survived by a sister, June Eckstein of Cassville; her eight children, Dr. Richard of Dodgeville, James (Lynn) of Dodgeville, Phillip (Gail) of Dodgeville, Thomas (Wanda) of Monona, Mark of Spring Green, Mary (Chris) Fitzsimons of Cross Plains, Diane (Michael) Flora of Verona, David (Angie) of Dodgeville; fifteen grandchildren, Jason Rohowetz, Lindsay Rohowetz, Eric Rohowetz, Bobbie Rohowetz, Julie Rohowetz, Tony Rohowetz, Jesse Rohowetz, Stacey Fitzsimons, Kelsey Fitzsimons, Matthew Rohowetz, Michael Rohowetz, Evan Rohowetz, Landon Flora, Mitchell Flora; two great grandchildren, Brock and Logan. She was preceded in death by her parents; her husband Robert; her brothers, Kenneth, Victor, Clifford; her sister, Sylvia Harris and her daughter-in-law, Carla Rohowetz. A Mass of Christian burial will be celebrated at 11:00 a.m. on Saturday, July 11, 2015 at ST. JOSEPH'S CATHOLIC CHURCH in Dodgeville. Monsignor Daniel Ganshert will officiate. Burial will be held in St. Joseph's Cemetery. Friends may call from 4:00 p.m. until 8:00 p.m. on Friday and from 9:30 a.m. until 10:30 a.m. on Saturday at the GORGEN-McGINLEY & AYERS FUNERAL HOME in Dodgeville. The family wishes to thank Upland Hills Hospital and St. Mary's Hospital for their care and especially Agrace Hospice and Bloomfield Nursing Home for their very special care and concern.

Dodgeville - Twila Marcella Rohowetz passed away on July 7, 2015 surrounded by her family at Bloomfield Nursing Home due to complications from a stroke just short of her 91st birthday leaving a very large void in the Rohowetz family. Twila... View Obituary & Service Information

The family of Twila M. Rohowetz created this Life Tributes page to make it easy to share your memories.

Send flowers to the Rohowetz family.