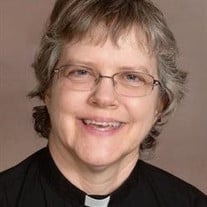 The Rev. Trudy A. Peterson was born December 11, 1955, in Springfield, IL, the daughter of Robert and Frieda (Stach) Maloney. Trudy and her brothers, Tom and Terry, were the first triplets born at Memorial Hospital in Springfield, IL. They joined a brother, John, who was two years old when they were born. Trudy was baptized January 11, 1956, at Immanuel Lutheran Church, Springfield, IL, and confirmed her faith in the rite of confirmation before Immanuel Lutheran. While in confirmation classes, Trudy first sensed the calling into the ministry. Trudy attended school in Springfield, graduating from Lanphier High School in 1973. She was number 11 in a class of 500. Besides her academic abilities, Trudy started a lifetime love of sewing in high school. She earned the Betty Crocker Award for sewing the same year her brother Tom received the Betty Crocker Award for cooking. She discovered a love of music during her education, spending many years in school and church choirs. Trudy attended Western Illinois University, Macomb, Illinois, and later transferred to Luther College, Decorah, Iowa, from which she graduated in 1973. Trudy then went on to attend Wartburg Theological Seminary in Dubuque, Iowa. One highlight of her seminary education was being able to go on a trip to Israel. On February 3, 1983, Trudy was ordained at West Clermont Lutheran Church, Clermont, Iowa. At Wartburg Seminary she met her husband, Kim. They were married on August 31, 1980 at Wartburg Theological Seminary with Dr. Norma Everist presiding. Their marriage was blessed with two daughters, Kymberly and Stephanie. Trudy and Kim served a number of parishes including: West Clermont Lutheran, Clermont, IA; Immanuel Lutheran, Titonka, IA; Cambridge Lutheran, Cambridge, IL; Grace Lutheran, Opheim, IL; St. Matthews Lutheran, Princeton, IL; St. John Lutheran, Boyden, IA; Grace Lutheran, Primghar, IA; Parish Three Lutheran, Woden, IA, and Good Hope Lutheran, Titonka, IA. As one of the early clergy couples in the Lutheran Church they often introduced women in ministry and worked together to love and serve their congregations. Throughout her career, Trudy served as an internship supervisor, on several committees including the planning committee for the Synod Assembly and the Candidacy Committee, served as an Interim for many churches, and served with Kim as Intentional Interim pastors at Lost Island Lutheran, Lost Island, IA, and Bethany Lutheran, Emmetsburg, IA. For the past three years, Trudy has struggled with ALS. On June 6, 2019, Trudy was finally set free, joining the Saints in Heaven. She is survived by her husband, The Rev. Kim Peterson, and daughters, Kymberly (Edward) Pease of Boyden, IA, and Stephanie Peterson of Sanborn, IA. She is also survived by her brother Tom (Kat) Maloney of Springfield, IL; brother-in-law Steve (Kathy) Peterson of Dodgeville, WI; Nieces Jessica Scott, Stephanie Scott, & Nataley Maloney of Springfield, IL; nephew Michael (Melissa) Peterson and niece Michelle Peterson of Dodgeville, WI; several great-nieces and nephews; and many other family and friends. She was preceded in death by her parents, Robert and Frieda Maloney, and brothers Terry Maloney and John Maloney. Memorials in Reverend Trudy’s memory will be directed by the family to the ALS Association and to the Western Iowa Synod Seminarian Support. A funeral service will be held Monday, June 10, 2019, at 10:30 AM at Good Hope Lutheran Church in Titonka with Bishop Rodger Prois officiating. Her family will greet friends on Sunday from 5 to 7 PM at Oakcrest Funeral Services of Titonka and will continue one hour prior to the service at the church on Monday. Further visitation will be held at the GORGEN-McGINLEY & AYERS FUNERAL HOME in Dodgeville, WI on Tuesday, June 11, 2019 from 5 to 7 PM. Graveside services will be held Wednesday, June 12, 2019 at 1:30 PM at OTTER CREEK LUTHERAN CEMETERY in rural Highland, WI, with Bishop Viviane Thomas-Breitfeld presiding.

The Rev. Trudy A. Peterson was born December 11, 1955, in Springfield, IL, the daughter of Robert and Frieda (Stach) Maloney. Trudy and her brothers, Tom and Terry, were the first triplets born at Memorial Hospital in Springfield, IL. They... View Obituary & Service Information

The family of Rev Trudy A. Peterson created this Life Tributes page to make it easy to share your memories.

Send flowers to the Peterson family.