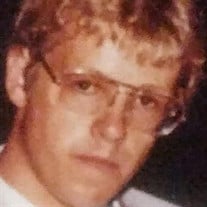 Janesville / Dodgeville - Timm Donald Schroeder, age 59, of Janesville, Wisconsin went home to be with the Lord and his twin brother, Todd Douglas Schroeder on Tuesday, June 19, 2018. Timm was born on April 22, 1959, in Dodgeville, the son of Palmer and Mary (Davies) Schroeder. He graduated from Dodgeville High School in 1977. He lived in Janesville,WI for over 30 years where he had a strong support system plus friends who were like a second family. He was an avid bowler and dedicated fan of both the Wisconsin Badgers and the Green Bay Packers. He will be remembered as having a wonderful, fun-loving personality with a generous and loving heart. Timm holds a special place in the hearts and lives of those he touched and will be dearly missed. Timm is survived by his siblings, Marsha Dale, Sandra Templeton, Mark (Debbie) Schroeder, Paula (Jim) Kozlowski, Shelley Schroeder and Stephanie (Peter) Goshorn; his nieces and nephews, Christopher (Katie), Jason (Tina), Brett (Samia), Megan (Carlos), Kristin (Brian), Kalen (Tyler), Lacey (Brian), Jessica, Paige, Logan and Keaton; his great nieces and nephews, Jim, Lucy, Sara, Andi, Jackson, Bo, Fletcher, Carlos, Jr., Christian, Emma, Molly, Cali, Cole, Crew, Cormac, Fiona, and Spencer; and his aunts and uncles, Ralph "Pidge"​ ​Davies, Emma Torgeson, Doug (Liz) Davies, Tom (Shirley) Davies and Nancy Doyle. ​​ Timm was preceded in death by his parents, his beloved twin brother Todd, his nephew, Justin, and numerous aunts and uncles. There will be a private family burial on Saturday, September 1, 2018, at East Side Cemetery. In lieu of flowers donations can be made in Timm's name to the National Alliance on Mental Health Wisconsin at https://www.namiwisconsin.org/donate/. "For God so loved the world that he gave his only begotten son that whosoever believes in him shall not perish but have everlasting life." John 3:16

Janesville / Dodgeville - Timm Donald Schroeder, age 59, of Janesville, Wisconsin went home to be with the Lord and his twin brother, Todd Douglas Schroeder on Tuesday, June 19, 2018. Timm was born on April 22, 1959, in Dodgeville, the son... View Obituary & Service Information

The family of Timm Donald Schroeder created this Life Tributes page to make it easy to share your memories.

Send flowers to the Schroeder family.