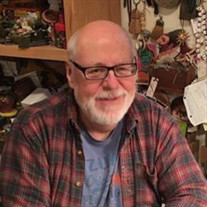 Mineral Point - Thomas John Kelly, 71 passed away on June 27, 2021 at Mineral Point Health Services in Mineral Point, WI. Tom was born in Horicon, WI on November 2, 1949, to parents Hazel (Anderson) and Irving Kelly. After graduating from Horicon High School Tom attended the University of WI - Milwaukee where he earned a Bachelor of Fine Arts, Painting in 1972. Following college graduation, Tom returned to Horicon and worked for John Deere Manufacturing Company for three years. Unable to curtail his artistic desires, he left Horicon and discovered Mineral Point in 1975. As with many artists, his humble artistic beginnings provided an opportunity to work in other fields. He was fortunate to discover the Federal Cabinet Shop, providing a sustaining wage, while establishing himself as an artist. Tom worked with Pennsylvania Dutch and fraktur, a form of American Folk art. He also began to replicate carvings of Windsor chairs, but this didn’t satisfy his creative needs. He continued to develop his own artistic style, and became nationally known when Lands’ End commissioned him to paint five Christmas catalog covers and illustrations within their catalogs. His work has also been represented in many shows and galleries. Tom’s whimsical style, intermixed with vivid use of color drew people to his work with a desire to understand the man behind the work. Tom was also proud of his work for the University of WI Children’s Hospital, where he was given artistic freedom to create an environment for children undergoing medical treatment. If only for a moment, his creations freed children from the burden and worry of medical treatments providing an escape from their realities. His work featured 3-ring circus scenes on the children’s floor, and hundreds of ornaments for a 27 foot Christmas tree in the main lobby. He painted a life size cow for Cows on Parade and murals of the Four Seasons on display at the U.W. Health and the American Center Hospital. Quite simply, Tom was art. He had the unique talent to envision each item he saw as a part of an artistic creation. Perhaps it was this gift that led him to become such an avid collector of “fine things and stuff”. After a courtship lasting several decades, his life was fulfilled when the love of his life, Kathie Landon finally said yes on October 11, 2008 (her birthday). Together, they established a network of friends and followers of Tom’s work that crossed geographical, political, ethnic, and socio-economic boundaries. Tom was rich with friends. Tom will be remembered for his creative spirit, love of family, friends and art. Tom is survived by his wife and soulmate, Kathie Landon Kelly, his two step-sons Adam Landon (Crystal) and Matthew Landon, two step-granddaughters, Naidah and Brynlee Landon, his sister Sandra Mason. A memorial service and celebration of life will be held: Sunday, July 11, 2021 @ LIND PAVILION, 411 Commerce St, Mineral Point, WI Memorial Service at 12:00 PM Celebration of Life immediately following from 12:00 - 4:00 p.m. In lieu of flowers, please consider a donation to Shake Rag Alley in Tom’s name. Donations can be sent to: Shake Rag Alley 18 Shake Rag St, Mineral Point, WI 53565. Or shakeragalley.org We thank everyone who has supported us during this time. The family especially wants to remember the loving staff at Mineral Point Health Services and St. Croix Hospice.

The family of Thomas John Kelly created this Life Tributes page to make it easy to share your memories.

Send flowers to the Kelly family.