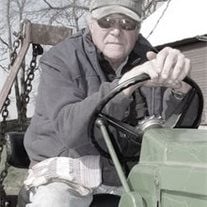 Mineral Point - Thomas Hendrickson Harford, age 72, of Mineral Point, passed away peacefully at his home on Sunday, March 5, 2017. Tom was born on November 1, 1944, to Willard and Madeline Harford. Tom lived his entire life in Mineral Point, Wisconsin on his family farm. He was an industrious and talented craftsman who worked in the construction industry and as a skilled mechanic. He retired as the maintenance director of CORE for Land's End in 2004, dedicating his labor to his farm. His hobbies included extensively improving his family farm, building and restoring automobiles, camping, tubing, rafting, and spending time with his family. He lived every day, enjoying music and most of all, humor. Tom is survived by his life companion of thirty years, Peggy Brendemuehl, his children: Ann (Grant) Gorgen of Mineral Point, Bill (Sommer) Harford of Alexandria, VA, and Josh (Amanda) Harford of Cottage Grove. Stepchildren, Fred (Valerie) Johnson of Albany, Thomas (Jennifer) Johnson of Kapolei, HI, and Mickey (Krista Schermetzler) Johnson of Mineral Point. He is further survived by his sister, Sally (Lee) Rudolph of Bloomington, IL. Also survived by his ten grandchildren: Lexie, Tyra, Grady, Gunnar, Ross, Madeline, Lennon, Luke, Myah, and Elliana. He is also survived by his nieces, nephews, and many friends. He was preceded in death by his parents, Willard and Madeline Harford, and special Aunts Alice and Mary. Funeral Services will be held on Thursday, March 9, 2017 at 11:00 a.m. at the CONGREGATIONAL UNITED CHURCH OF CHRIST in Mineral Point. Pastor Beryl Melcher will officiate. Burial will be in Graceland Cemetery. A visitation will be held on Wednesday, March 8, 2017 from 4:00 until 8:00 p.m. at the GORGEN FUNERAL HOME in Mineral Point, and on Thursday from 10:00 until 10:50 a.m. at the church.

The family of Thomas H. Harford created this Life Tributes page to make it easy to share your memories.

Send flowers to the Harford family.