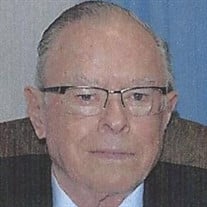 Ridgeway – Thomas R. Collins, age 94, of Ridgeway passed away on Sunday, June 21, 2020 at Ingelside Manor in Mt. Horeb. He was born on February 8,1926, the son of Elmer T. and Katherine (Burns) Collins. He was united in marriage on September 9,1950 for almost 70 years with the love of his life, Marian D. Fischer. Tom and Marian had a beautiful life together until May 1, 2013 when a devastating fall caused Marian to lose all mobility and become a permanent resident of Ingelside Manor in Mt. Horeb. During the early time of their life together, they operated Collins Oil Co. Tom later began purchasing rundown vacant properties in the Village of Ridgeway, completely rehabilitating and then listing them for sale. That led to a 40 year career in real estate as a builder, developer, broker and real estate appraiser. Tom retired in 2006. Tom served for many years as Village of Ridgeway President, a 35 year member of the Wisconsin Realtors Association, the Knights of Columbus, American Legion and many civic organizations. Tom served in the US Navy aboard the USS Romulus in the South Pacific during WW II from June 20, 1944 to June 8, 1946. He then served in the US Navy Reserve from July 22, 1948 to April 21, 1953. Tom was preceded in death by his parents, his brother Bernard “Bun” Collins; his sisters Mary Margaret Olson and Kathleen Dale; his sister-in-law Marian Collins, his brother-in-law Robert Olson, his brothers-in-law Frank Stetter and Bernard Fischer and his godson Mark Thomas Stetter. He is survived by his loving wife Marian Collins; his sister-in-law Ann Stetter; his nieces and nephews; other relatives and friends. A Mass of Christian Burial will be celebrated at 11:00 a.m. on Thursday, June 25, 2020 at ST. BRIDGET’S CATHOLIC CHURCH in Ridgeway. Fr. Stephen Petrica will officiate. Burial will be held in St. Bridget’s Cemetery with Military Graveside Rites accorded by the Ridgeway American Legion. Friends may call from 10:00 a.m. until time of Mass on Thursday at the church. In lieu of flowers, the family suggests that memorials be made to Ingelside Communities, 407 N. 8th Street, Mt. Horeb, WI 53572. A special thanks to the staff at Ingelside Communities for their kindness and compassion for Tom and Marian.

Ridgeway &#8211; Thomas R. Collins, age 94, of Ridgeway passed away on Sunday, June 21, 2020 at Ingelside Manor in Mt. Horeb. He was born on February 8,1926, the son of Elmer T. and Katherine (Burns) Collins. He was united in marriage on September... View Obituary & Service Information

The family of Thomas R. Collins created this Life Tributes page to make it easy to share your memories.

Send flowers to the Collins family.