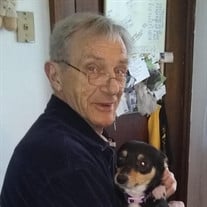 Avoca – Thomas Augustine, age 70, born in Chicago on December 30, 1950. Died in Avoca, WI on October 2, 2021. He is survived by his wife, Zihna Augustine; his son, Adam (Nicki); his daughter Shannon Lavender and her son Cory; his step children Joseph Emery, Kathryn Filson (Charles) and their children Daniel and Thomas, Gennevieve Weiss (Jake) and their children Lucie and Benamin, Elizabeth Engebretson, Jerry Engebretson (Angie) and their granddaughters Trinity and Nevaeh, Maya Mattke (Keith); his brother, Robert Augustine (Antoinette); and many friends and co-workers. Tom was the Light of my life. He brought me joy from a place of sorrow. He encouraged and supported me in everything. He made me laugh and cry and sometimes want to smack him with his "Uh-huh's. He loved music and nature...fishing and camping especially. First place he took me was to Oktoberfest. I met his daughter who told me, "Nice to meet you...but if you hurt my dad I will hurt you!" I came to love her very much. He liked to help people. I got many calls from work about someone who came in with a flat 5 minutes before closing, saying he would be late. He was always fixing things or gardening or helping me with things I couldn't do. He was so smart...brilliant, at times, with thinking outside the box. But, our first fight was when I told him he was smart. He thought I was making fun of him. But, I wasn't. He took good care of me...and I him. Our love came late in life...we met in an online dating sight. When I saw his picture I knew he was the one. Just a gut feeling. And I was right. We got married May 30, 2015 (6 years ago) on my birthday because I figured he'd only have one date to remember. We were both 64 and played the Beatles song “Will you still Love me" at the wedding. Everything that could go wrong that day did. The worst was, the chapel he built for the wedding had a tarp over it to keep it dry and he ran into town and it rained enough to collapse the whole thing. Had a day, and lots of help, to rebuild it in a day. On our first anniversary he forgot BOTH my birthday and our anniversary. Unfortunately, that was so Tom. Too many things in his brain to keep track of. He brought so much joy into my life. He took a big part of my heart with him when he left me so suddenly. He often told me I was the best thing that had ever happened to him. I felt the same. In looking through his things today I found a sign in for an account...it said "Eternal Love". Made me cry. I am so going to miss you, My Love! He will be cremated and some of his ashes will be sprinkled at Brady's Bluff at LaCrosse and The Flambeau Flowage where he spent many happy vacations growing up and where we honeymooned. There will be a Celebration of Life at my home at a later date.

The family of Thomas Augustine created this Life Tributes page to make it easy to share your memories.

Send flowers to the Augustine family.