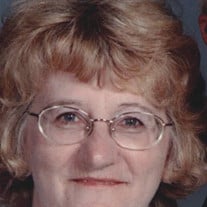 Mineral Point - Theresa A. (Terri) Kinsman, age 69, of Mineral Point passed away on March 1, 2019, in her home, surrounded by her loving family, following an extended illness. Terri was born on November 8, 1949, to Robert (Bob) and Marie Claire Goldthorpe, in Dodgeville, WI, the second child of ten. She attended North Survey Country School near Dodgeville through 8th grade, then went on to graduate from Dodgeville High School in 1967. Terri was united in marriage to the love of her life, Bill, first in a civil ceremony in Rockford, IL, on June 28, 1977, and then at a church service, on December 20, 1977, at Hope Lutheran Church in Mineral Point. Terri and Bill lived on the Kinsman Family Farm in rural Mineral Point their entire married life, along with their four children, herd of beef cattle, flock of chickens, hogs, sheep, dogs, cats, and whatever other critters showed up on the farm looking for a home. Terri, though shy at first, was a tremendously gentle, friendly, caring person, who always put other’s needs before her own. Starting with leaving college to help with raising her younger siblings after the death of their father, to becoming one of the charter members of Mineral Point Rescue Squad in 1986. Terri poured her heart and soul into the “Squad,” spending many nights and weekends away from her family to help others in need. Terri was a very gifted artist, painting many pictures for others as gifts, and even illustrating several children’s books, as well as some books for the Iowa County Historical Society. Terri and her siblings enjoyed telling stories about their youth, and in 2013, she decided to put pen to paper, and wrote and illustrated a book full of short stories about growing up on the farm, and all the mischief she and her siblings got into, which she was able to have published, giving her books to family and friends. Terri also spent many years acting as a leader for the County Line 4-H Club, which she thoroughly enjoyed as it allowed her to spend time with her kids, and use her creative flair in helping with projects. Terri was proud of her family, first and foremost, and in addition to her own kids, she had many, many nieces and nephews who thought of her as their second mother, as well as many friends of her kids’, who would often show up at the farm with a big hug for her, and a “Hey, Mama Terri!” Terri enjoyed being surrounded by those she loved, and made sure that anyone who entered her home was treated as family. Terri is survived by her husband of 41 years, Bill, sons - Ed (Patricia) Kligora of Dodgeville and Kerry (Julie) Kligora of Mineral Point, daughter Shannon (Doug) Wilson of Edmund, grandchildren - Stefan (Jenna Larkin) Kligora, Kirsten (Troy Geasland) Kligora, Tylor Wilson, Josh (Stephanie) Wilson, Carlee (Josh) Kerl, great-grandchildren – Reagan, Aubrey, James, Kierah, Emma, and Cambrian, sisters - Eileen (David) Drake, Maryclaire (Ray) Murphy, Bobbi Jelle, Colleen (Lenny) Hooks, and Lori (Mike) McGowan, brothers - Rob (Tracy Beerkircher) Goldthorpe and Dan (Kaye) Goldthorpe, sister-in-law Janet (Wes) Elliott, and brother-in-law Dave (Marita) Olson, numerous nieces, nephews, cousins, and friends. Terri was preceded in death by her youngest daughter, Pam, in 2006, her parents, Bob in 1968, and Claire in 2002, her step-father Bill Strand in 1983, sister Dorothy in 1963, sister Marsha in 1978, father-in-law John Kinsman in 1976, mother-in-law Clara Kinsman in 2010, nephew Jeremy in 1978, and brother-in-law Dick in 2010. Terri’s legacy and kindness will live on in the lives she touched, the people she helped, the love she gave freely, and the wonderful memories she gave us all. Terri’s family would like to send a special thank you to Dr. Grieshaber for your years of friendship and care, Upland Hills Hospice for your compassionate care over the past seven months, special neighbors and friends for checking in on the farm, as well as for all the cards, meals, and phone calls in recent months. Your kindness will never be forgotten. Funeral services will be held on Wednesday, March 6, 2019, at 11:00 a.m. at the HOPE LUTHERAN CHURCH in Mineral Point. Pastor Rich McLeer will officiate. Burial will be in Graceland Cemetery. Visitation will be on Tuesday, March 5, 2019, from 3:00 - 8:00 p.m. and on Wednesday from 10:00 until 10:50 a.m. at the HOPE LUTHERAN CHURCH. In honoring Terri’s wishes, in lieu of flowers, memorials may be given to Hodan Community Services, Mineral Point Rescue Squad, Pointer Pantry, Hope Lutheran Church, or Upland Hills Hospice.

Mineral Point - Theresa A. (Terri) Kinsman, age 69, of Mineral Point passed away on March 1, 2019, in her home, surrounded by her loving family, following an extended illness. Terri was born on November 8, 1949, to Robert (Bob) and Marie... View Obituary & Service Information

The family of Theresa "Terri" Ann Kinsman created this Life Tributes page to make it easy to share your memories.

Send flowers to the Kinsman family.