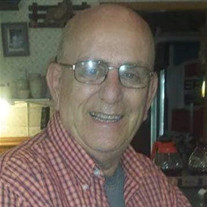 Mineral Point - Steven Joseph Hermanson "Hermie", age 69 of Mineral Point passed away peacefully surrounded by his loving family on Friday, April 19, 2019 at Upland Hills Health in Dodgeville. He was born on June 12, 1949 the son of Harlow and Lenice (Dobson) Hermanson. He attended Dodgeville and Mineral Point schools graduating in 1968. He enlisted in the U.S. Army in July of 1968 and was discharged in July of 1970, serving in Vietnam. He married Pauline Ann Olson on August 18, 1973. He was an officer for the Mineral Point Police Department for over 30 years and retired in 2011. He was also a member of the Mineral Point Rescue Squad from 1993-2007. After his retirement Hermie later pursued his passion for playing cards by becoming a blackjack dealer at The Q, in Dubuque. He also worked part time at the Red Rooster in Mineral Point serving coffee to the community. Steve was devoted to his community and was recognized as Citizen of the Year by the Mineral Point American Legion. He is survived by his wife Pauline of Mineral Point, 3 sons; Brian and Brett both of Mineral Point and Brad (Jenny Higgins) of Dodgeville; 4 grandchildren Bailey Hermanson, Landon Hermanson, Aliyah Meckley and Aysen Hermanson; his siblings: Jerry and Tammy Hermanson of Madison, Mary Lynn and Richard Duncan of Lancaster, John and Diane Hermanson of Dodgeville, David and Carol Hermanson of Mineral Point, Wendy and Dennis Kitsemble of Van Wert, Ohio; and many nieces, nephews, relatives and friends. He is preceded in death by his parents, a brother Morris Hermanson, a half sister Dorothy Petrie, a half brother Gabe Hermanson, a special sister-in-law Karen Hermanson, brother-in-law Paul Grudzina and niece Cheryl Hermanson. Funeral Services will be held on Wednesday, April 24, 2019 at 11:00 a.m. at the FAITH LUTHERAN CHURCH in Mineral Point. Pastor Cal Schaver will officiate. Military Graveside Rites will be accorded by the Mineral Point American Legion Post 170 at Graceland Cemetery. A visitation will be held on Tuesday, April 23, from 4:00 until 8:00 p.m. and on Wednesday from 10:00 until 10:50 a.m. all at FAITH LUTHERAN CHURCH. A luncheon will follow at the Mineral Point Rescue Squad building. In lieu of flowers, Hermie requested memorials to the family for future donations to organizations.

Mineral Point - Steven Joseph Hermanson "Hermie", age 69 of Mineral Point passed away peacefully surrounded by his loving family on Friday, April 19, 2019 at Upland Hills Health in Dodgeville. He was born on June 12, 1949 the son of Harlow... View Obituary & Service Information

The family of Steven Joseph Hermanson "Hermie" created this Life Tributes page to make it easy to share your memories.

Send flowers to the Hermanson family.