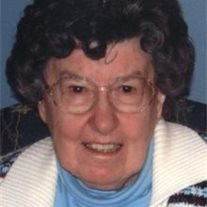 Rochester, MN - Sister Mary Stellan May entered into her eternal rest on Friday, November 2, 2012 on All Souls Day at Assisi Heights Convent in Rochester, Minnesota. Sr. Stellan, the former Genevieve May was born October 18, 1927 in Mineral Point, Wisconsin. She was the daughter of the late Herman and Mary (Mae) McCarville May. She received her elementary and high school education in the Mineral Point Public schools, graduating in the Class of 1944. She went on to receive her degree as a Registered Medical Record Librarian from the University of Wisconsin-Milwaukee. For several years she was employed at St. Mary's Hospital in Madison, WI. In 1955 she entered the third order of Saint Francis Convent in Winona, MN. After years of study she took her first vows in October,1957 and her final vows in May of l960 at Assisi Heights Convent in Rochester, MN. During her career of devoted service she maintained the medical records offices at hospitals in Portsmouth,( Ohio), Milwaukee, and Chicago. She retired to Assisi Heights in Rochester where in 2007 she joyfully celebrated her Golden Jubilee. During her recent illness she kept her kind and cheerful disposition as well as her love of sweets especially chocolates! Surviving her are brothers, Harold (Bea) May of Madison, WI; Jack (Laura) May of Roseville, CA; sister, Marge (Peter) Terenzetti of Utica, NY.; sister-in-law, Lucille May of Mineral Point,WI; brother-in-law, James Christ of Menomonee Falls. WI. She was preceded in death by her parents, a brother, Paul May of Mineral Point, WI , sister, Norma Christ and son Brian of Menomonee Falls, Elaine May of Muscatine, IA. Also surviving are numerous nieces and nephews and cousins. The family would like to express our deepest gratitude to the sisters, nurses and aids at Assisi Heights for their compassion and loving care and kindness showed to Sister and her family. May God bless each and every one of you. A prayer vigil was held at 6:30 p.m. on Wednesday, Nov. 7, 2012 at Assisi Heights. The Funeral Mass was held at 11:00 a.m. on Thursday, Nov. 8, 2012 in Assisi Chapel. Her final resting place will be Calvary Cemetery in Rochester, MN. Anyone wishing to make a memorial gift may send it to the: The Sisters of St. Francis Assisi Heights, 14th St NW, Rochester, MN 55901

Rochester, MN - Sister Mary Stellan May entered into her eternal rest on Friday, November 2, 2012 on All Souls Day at Assisi Heights Convent in Rochester, Minnesota. Sr. Stellan, the former Genevieve May was born October 18, 1927 in Mineral... View Obituary & Service Information

The family of Sister Sister Mary Stellan May created this Life Tributes page to make it easy to share your memories.

Rochester, MN - Sister Mary Stellan May entered into her eternal...