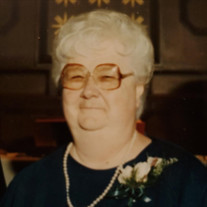 Mineral Point - Shirley Ann Polkinghorn, age 89, of Mineral Point passed away peacefully on Monday, August 3, 2020 at Upland Hills Nursing & Rehabilitation Center in Dodgeville. She was born in Mount Horeb on April 22, 1931 the daughter of Milo and Elizabeth (Litschauer) Huset. She lived in the Arena area in her early years before moving to Dodgeville and graduating from Dodgeville High School in 1949. Shirley married Bob Polkinghorn on February 14, 1950 and they settled in Mineral Point raising their 3 sons. She was a caretaker at the Mineral Point Care Center for many years. She loved spending time with her family. Shirley is survived by her son Jim (Mary) Polkinghorn of Darlington; 7 grandchildren, John Jr. (Cheryl), Justin (Dorothy), Josh and Chris Polkinghorn, Courtney (Steve) Hutson, John, and Jenny Jo (Gilbert) Moe; several great-grandchildren; 3 sisters, Dorothy (Marvin) Klemme, Amy (Gary) Edl and Judy Ferguson; many nieces, nephews, relatives and friends. She is preceded in death by her parents, her husband Bob on January 10, 1989, 2 sons; Joe in 2007 and John in 2017, a granddaughter Kelsea, a grandson Joey, a brother Clarence Huset, and a brother-in-law Richard Ferguson. Private Family Graveside Services will be held on Friday at Graceland Cemetery.

The family of Shirley Ann Polkinghorn created this Life Tributes page to make it easy to share your memories.

Send flowers to the Polkinghorn family.