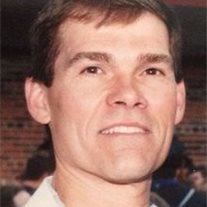 Dodgeville - Scott L. Murn, age 63, passed away Saturday, October 31, 2015, at home surrounded by his family following a two year battle with cancer. He was born on September 25, 1952, in Fort Atkinson to James C. and Helen (Wappler) Murn. Scott studied mechanical engineering at the University of Wisconsin before meeting the love of his life, Marcia (Klosterman). They married on April 7, 1978, and settled in Dodgeville. In addition to being a loving father of four, Scott had a sparkling safety record over his 30-year career at UPS. He enjoyed playing and watching sports and was a talented drummer, having played in rock bands in his youth. Scott was known for his quiet determination, his patience and his kindness. His passion for exploration and travel took him all over the US, to Mexico, Europe and Asia. Scott was especially proud of his children who inherited his enthusiasm for travel and willingness to strike out and make lives for themselves in new places, including Chicago, New York, Madrid, Taipei and Bangkok, and he loved to go visit them. He enjoyed spending time with his grandson, Jack, and was looking forward to the arrival of another grandchild in December. Scott is survived by his wife, Marcia and their children, John, Emily (Steven) Wirth, Eric (Meggy) and Jeremy (Gloria Espinoza); his grandson Jack Cooney; his father James (Marge Daentl) Murn; his mother Helen Murn; his siblings Sherry (Raymond) Einerson, James (Sue Wynn), David (Mary) and Charles (Jackie); as well as dozens of nieces, nephews and in-laws. A Mass of Christian Burial will be celebrated at 11:30 a.m. on Wednesday, November 4, 2015 at ST. JOSEPH'S CATHOLIC CHURCH in Dodgeville, where a luncheon will follow. Monsignor Daniel Ganshert will officiate. Friends may call from 4:00 p.m. until 8:00 p.m. on Tuesday and from 10:00 a.m. until 11:00 a.m. on Wednesday at the GORGEN-McGINLEY & AYERS FUNERAL HOME in Dodgeville.

The family of Scott L. Murn created this Life Tributes page to make it easy to share your memories.

Send flowers to the Murn family.