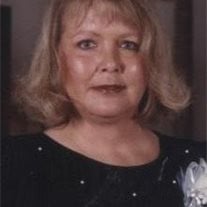 Rewey - Sandra J. Ziegler, age 56 of Rewey died on Monday, August 13, 2012 at Mercy Hospital in Janesville, WI. She was born on September 10, 1955 in Marshfield, WI, the daughter of Edwin & Maurine (Wilhelm) Bauer. Sandy was united in marriage to Wayne Ziegler on September 15, 1973 in Neillsville, WI. Sandy's greatest passion was being a mother and grandmother. Sandy had deep religious faith and took great pride in being a Godmother to her nephew and nieces, Christopher Oldham, Amanda (Bauer) Petrack, and Kimberly Ludlum. Sandy was a devoted mother and housewife but also waitressed in evenings and managed the Mineral Point Laundromat for 15 years. She had a flare for fashion. She utilized her skills as a Buyer and Sales Manager for The Boutique. She loved to travel and had the pleasure of visiting Europe, England and all over the U.S. Sandy loved life. Her twinkling blue eyes and contagious laughter touched the hearts of everyone she met. She was extremely generous, always giving of herself all year through, and most especially during the holidays, where she was affectionately known as "Sandy Christmas". She loved to bake, cook and many of her children's friends considered her their "Second Mother". She leaves her loving memories to be cherished by her husband Wayne of 39 years; her daughter Sheila (Mark) Toensing and her grandchildren, Jared and Sara Toensing; her son Seth (Pam) Ziegler; her loving parents, Edwin and Maurine (Wilhelm) Bauer; her brothers and sisters; Michael (Shelley) Bauer, Patrick (Vicki) Bauer, Nancy Oldham, Susan (Kenneth) Ludlum and many nieces, nephews and dear friends. Funeral services will be held at 11:00 a.m. on Friday, August 17, 2012 at BETHLEHEM LUTHERAN CHURCH in Edmund. Pastor Kathy Jacobson will officiate. Burial will be held in Mifflin Cemetery. Friends may call from 4:00 p.m. until 8:00 p.m. on Thursday at the GORGEN FUNERAL HOME in Mineral Point and from 10:00 a.m. until time of services on Friday at the church.

The family of Sandra J. Ziegler created this Life Tributes page to make it easy to share your memories.

Send flowers to the Ziegler family.