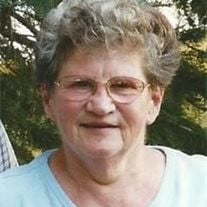 Dodgeville - Sandra K. Jacobson, age 75 of Dodgeville, passed away unexpectedly at St Mary's Hospital in Madison on January, 31, 2014. She was born on February 9, 1938 in Hopkinton IA, a daughter of Paul and Philomena (Kertels) Gearhart. Sandra graduated as a registered nurse from the University of Nursing in Dubuque IA where she began working as registered nurse at Finley Hospital in Dubuque. Sandra was married to James R. Jacobson of Dodgeville, on November 21, 1959. She continued practicing nursing at Dodgeville General Hospital and at Bloomfield Manor until 2001. She returned on a limited part time basis at Bloomfield Manor until 2013. Sandra and her husband James were dairy farmers in Dodgeville where they raised their family. Sandra's hobbies included gardening, canning, cooking, playing cards with her family and continuous learning. She often would be seen looking at encyclopedias, dictionaries, atlases, and cookbooks. Sandra is survived by her loving husband, James R Jacobson; her four loving children, Ronald (Carla) Jacobson, of Dodgeville, Sharon (Joseph) Williams, of Milwaukee, Richard Jacobson, of Dodgeville, Jennifer (Jason) Von Ruden, of Dousman; 7 grandchildren, Steven and Brian Williams, of Milwaukee, Jalissa, Jorah, and Olivia Jacobson, of Dodgeville, Rebecca and Amanda Von Ruden, of Dousman; her dear friend, Muffy Swingen, of Dodgeville; two great grandchildren, Andre Price and Damien Williams, both of Milwaukee; her sister, Gayle Saunders of Manchester, IA. She was preceded in death by her parents, Paul and Philomena Gearhart, her two brothers, Herbert and William Gearhart and her sister, Margaret Reth, all of Iowa. Funeral services will be held at 1:00 p.m. on Wednesday, February 5, 2014 at GRACE LUTHERAN CHURCH in Dodgeville. Rev. Steven Kottke will officiate. Burial will be held in East Side Cemetery. Friends may call from 10:30 a.m. until time of services on Wednesday at the church.

Dodgeville - Sandra K. Jacobson, age 75 of Dodgeville, passed away unexpectedly at St Mary's Hospital in Madison on January, 31, 2014. She was born on February 9, 1938 in Hopkinton IA, a daughter of Paul and Philomena (Kertels) Gearhart. Sandra... View Obituary & Service Information

The family of Sandra K. Jacobson created this Life Tributes page to make it easy to share your memories.