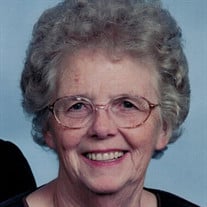 Ridgeway – Sally Rae McSherry, age 86, of Ridgeway, passed away peacefully on Sunday, March 6, 2022 at Upland Hills Nursing and Rehabilitation Center, Dodgeville, WI. Sally was born on April 15th, 1935, to parents Ronald and Lee Cecelia (Abaly) Buck. They lived in Crystal Lake, IL and when Sally was a young girl moved to Madison, WI. Sally shared her home with four sisters and a brother. She attended Central High School and graduated Salutatorian of her class in 1953. Sally met her husband John McSherry when they both worked at Capitol Theater as teenagers. They were married on October 9th, 1954 and have shared 67 years of marriage. They moved to Ridgeway in 1957 and raised seven children. Sally was a loving mother who was active in her children's school years and in the community. She was artistic, creative, and a life-long learner. She enjoyed reading, painting, gardening, flowers, and nature. Being a wife, mother and grandmother is where she directed her energy and she was exemplary at all. She was loved and admired deeply by her family. The addition of grandchildren and great grandchildren brought even more joy to her and John's lives. Her children and grandchildren have a multitude of memories to hold in their hearts and they share them often. Memories that include years of family gatherings and the delicious food that she prepared for and with her family. Many are simple and fun memories that are made by a large family. It is a gift to have a home that is an open door hub and always welcoming. Sally worked at various part-time jobs while raising her young family. She was then employed at Lands' End and retired after a career there of 27 years. Sally and John enjoyed many travels throughout their years together including a trip to Ireland, Canada, and many of the states along with two adventures to Alaska. Sally is survived by, and will be missed always and forever by, her husband John and their children, Jim (Karla) McSherry, Gene (Kari) McSherry, Kathy (David dec.) Kruger, Patty (Dennis) Rickey, Mary McSherry, Carol Murphy and Bill McSherry, her sister Janis (Phil) Lindeman, brothers-in-law Patrick (Victoria) McSherry and Michael (Gina) McSherry, 17 grandchildren, 10 great grandchildren, nieces, nephews, and her beloved pet dog Suzi. Sally was preceded in death by her parents Ronald and Cecelia Buck, sisters Mary Lou, Kay and Lee, brother Dan and sister-in-law Ruth, mother-in-law and father-in-law, John and Nora McSherry, brother-in-law Thomas McSherry, son-in-law David Kruger, sister-in-law Mary Irene and brother-in-law Kenneth Erfurth. We would like to express our gratitude and thanks to all of the staff at Uplands, who tenderly cared for Sally (Mom), off and on for almost 5 years. Along with Hospice, they kept her comfortable during her final months. We are thankful for all who were part of our team in providing her quality of life. A Mass of Christian Burial will be held at 12:00 p.m. (noon) on Saturday, March 19, 2022 at ST. BRIDGET’S CATHOLIC CHURCH in Ridgeway. A visitation will be offered from 10:00 a.m. until time of Mass on Saturday at the church. In lieu of flowers, if you wish to make a donation to a charity of your choice in Sally's name, please do so with our gratitude.

The family of Sally Rae McSherry created this Life Tributes page to make it easy to share your memories.

Send flowers to the McSherry family.