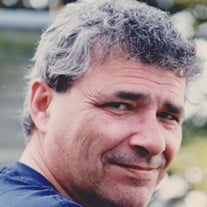 Russell Marglin, aged 72, died peacefully early Christmas morning, 2018. Russell was born in Rosiclare, Illinois, grew up in southern California, and returned to Rosiclare before entering the Navy during the Vietnam War. He moved to Springfield, Illinois in 1972. He held numerous positions, including perhaps his favorite with his friend Jack Strangstad of Springfield Cycle and Lock. While there, he played in several rock and roll bands. In 2004 he moved to Mineral Point, where he lived with his friend Lyn Strangstad for nearly the next 15 years. All that he did, he did well. He was a talented musician, a crossword puzzle master, an excellent bicycle mechanic, a meticulous house painter, a careful woodworker, and a good cook. He enjoyed animals, especially his dog Pepper. Russell had an almost encyclopedic knowledge of words, discerning spellings and meanings through their etymology. He excelled at quiz games, often solving puzzles as soon as a board was placed. His knowledge of film and television actors from the ‘40s through the ‘80s was flabbergasting. He enjoyed rhythm and blues and rock and roll music, especially Frank Zappa. What was important was not where he went nor what he did, but who he was. Russell was a man of integrity: honest, honorable, kind and gentle. He was inscrutable, unknowable, sometimes, even to close friends. A bright and unpretentious person, Russell was not much given to idle conversation. He offered respect to all who deserved it, yet he did not suffer fools gladly. He was preceded in death by his parents, Bill and Margaret Marglin and is survived by his brother John of Kansas City, his son Andrew of Missouri, his dear friend Lyn of Mineral Point, his dog Pepper, and numerous friends. A gathering of his friends to celebrate his life will take place at his home at 327 Doty Street on Saturday, January 5 from 2-4 p.m. In lieu of flowers, memorials may be sent to Pointer Pantry or the Iowa County Humane Society. Hail and farewell, Russell.

Russell Marglin, aged 72, died peacefully early Christmas morning, 2018. Russell was born in Rosiclare, Illinois, grew up in southern California, and returned to Rosiclare before entering the Navy during the Vietnam War. He moved to Springfield,... View Obituary & Service Information

The family of Russell Marglin created this Life Tributes page to make it easy to share your memories.

Send flowers to the Marglin family.