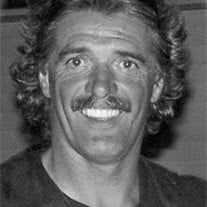 Highland - Racing Rueben Riley #14 took his last lap in his battle with cancer on Wednesday morning, September 17, 2014 at home with his biggest fans by his side. Rueben Loren Riley, age 55, was born in Darlington, WI on April 2, 1959 to Loren John and Jean Ann Riley. Rueben started grade school in Darlington and moved to Galena where he attended grade and high school. He eventually landed in Mineral Point and the Iowa county area. You might say he was a "free spirit" in his earlier days. Good friends and good times were always close by. He had a rich hearty laugh and dashing smile that brightened our days and warmed our hearts. Rueben was an avid outdoorsman, gifted mechanic and general "jack of all trades" handyman. He enjoyed hunting, fishing, cutting wood, camping and he spent many hours rebuilding his 1929 Model A. For several years, Rueben's passion was racing 4 cylinder cars on area dirt tracks. He also enjoyed a good round of bean bags and an occasional paintball fight with grand kids, whom he enjoyed hanging out and laughing with whenever he could. He was married on April 2, 1995 to Geraldine Ann Heaton at the Hyde Mill in rural Ridgeway, WI. They lived throughout Iowa County over the years and settled in Highland in 1999. Rueben was a skilled carpenter and worked for many years with Wick Building and then ventured into his own construction company, Triple R Construction. Rueben is survived by his mother, Jean Riley of Mineral Point; his wife Geri; four children, Lynn (Matt) Severson of Reedsburg, Robin (Kirk) Kiry of Dodgeville, Jaclin (Josh) Staley of Hatfield, Elyse Riley (Cody Rider) of Highland; seven sisters, Jeanene (Steve) Eastman of Blanchardville, Jackie (Bill) Ludlum of Mineral Point, Chris Long of Florissant, CO, Theresa (Steve) Cole of Galena, IL, Roberta (George Jr) Hildreth of Montfort, Carol (Scott) Schmitz of Mineral Point, Tina (Ted) PIttz of Mineral Point; one brother Tim (Deb) Riley of Mineral Point; six grandchildren, Alek, Olivia & Isabel Severson, Kam & Keihin Kiry, baby girl Staley due in October. He was preceded in death by his dad Loren, his son, Jeremy "Buddy" Helm, paternal grandparents, Reuben Riley and Bertha and Tom Saunders, maternal grandparents, James & Kathryn Rielly, and brother-in-law Joseph Heaton. A Celebration of the Life of Rueben Loren Riley will be held from 1:00 p.m. to 5:00 p.m. on Sunday, September 28, 2014 at the Hyde Store, rural Ridgeway, WI. In lieu of flowers memorials to the family are suggested.

Highland - Racing Rueben Riley #14 took his last lap in his battle with cancer on Wednesday morning, September 17, 2014 at home with his biggest fans by his side. Rueben Loren Riley, age 55, was born in Darlington, WI on April 2, 1959 to Loren... View Obituary & Service Information

The family of Rueben L. Riley created this Life Tributes page to make it easy to share your memories.

Send flowers to the Riley family.