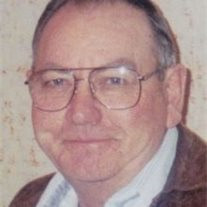 Mineral Point - Rudy Ernest Lindholm, age 71, passed away on Thursday, May 14, 2015 at his farm home in rural Mineral Point, Wisconsin surrounded by his family. Rudy was born August 6, 1943 to Ernest and Lorene Nydegger. Rudy was adopted by Morris and Elizabeth (Mullen) Lindholm at the age of six, along with his brother, Robert J. (Bobby). Rudy attended Mineral Point schools graduating in 1962. He was drafted into the United States Army serving in Viet Nam with #170 Assault Helicopter Company, as crew chief during 1965-66. He was awarded two Purple Hearts and other medals of honor. He was an active member of the Mineral Point American Legion Post 170 for 50 years serving as past commander. He was the Sergeant of Arms of the Drill Squad, and a member of the VFW #7629, DAV #67 and 40 & 8. In 1999 he was awarded the Outstanding Citizen of the year by the Mineral Point American Legion. Rudy was a member of the Iowa County Fair Association for 20+ years, serving as President of the fair board for a number of years. Through the years he was a 4-H leader for the 4 Ways 4-H Club; Community Antique Tractor Pullers Club, serving as Vice President. He enjoyed going to the many tractor pulls with his son's, Tom (Farmall M) and Tim (Farmall H) and was very proud to be a part of their accomplishments of the many trophies during their participation. He enjoyed the Iowa County Fair each year, along with parades, car shows, snowmobiling, car racing and coached the Rope Pulling Team. He was a "BIG" collector of Farmall tractors and cars. Rudy farmed through out the years on the home farm on Fort Defiance Road and his present farm, and later hauled milk for Busser Trucking. He worked at the Hodan Center where the clients had a special place in his heart. In 1994 he was presented the ARC of Iowa County Hodan Center Service Award. Rudy is survived by his wife, Sandee of 26 years. They were married on December 29, 1989. His children, Carolyn (Kevin) Butteris; Tom Lindholm; Tim (Amy Graber) Lindholm, all of Mineral Point, WI; and their mother, Linda; Step-daughter, Tami (Perry) Adams, of Gotham, WI; Six grandchildren, Derrick (Jami) Pfaff of Kailua, HI; Clarisa Lindholm, Kayla, Cody and Caden Lindholm, Blake Butteris; One great-grandson, Aaron Rudy to be born in June, 2015; 4 Step-grandchildren, Brandon (Megan Campbell) Butteris, Brittany (Patrick) Loeffelholz, Brook (Kevin Knight) Butteris, Alan (Jenn) Adams. 7 Step-Greatgrandchildren; sister, Marlene (Jack) Reeder of Hayward, WI; Aunt Marion Mullen, of Darlington, WI and his special companion, his dog, Molly, along with many friends. He was preceded in death by his parents and brother, Bobby. Funeral services will be held Wednesday, May 20, 2015 at 11:00 a.m. at the FIRST UNITED METHODIST CHURCH in Mineral Point. Pastor Becky Henke will officiate. Visitation will be held Tuesday, May 19 from 4:00 - 8:00 p.m. at the GORGEN FUNERAL HOME in Mineral Point and on Wednesday from 9:30-10:50 a.m. at the church. Military honors will be accorded by the Mineral Point Legion Post 170 at the family farm. In lieu of flowers, donations can be made to the charity of your choice.

Mineral Point - Rudy Ernest Lindholm, age 71, passed away on Thursday, May 14, 2015 at his farm home in rural Mineral Point, Wisconsin surrounded by his family. Rudy was born August 6, 1943 to Ernest and Lorene Nydegger. Rudy was adopted by... View Obituary & Service Information

The family of Rudy E. Lindholm created this Life Tributes page to make it easy to share your memories.

Send flowers to the Lindholm family.