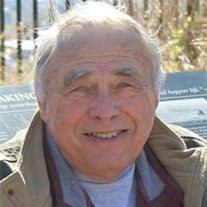 Dodgeville, WI – Royce Charles Reukauf, age 75, of Dodgeville, passed away peacefully on Monday, September 26, 2016, at his home surrounded by his loving family. Royce was born on August 30, 1941 in Mt. Hope, Wisconsin to Karl and Edna Reukauf. He was the third of six children, was raised in the Mt. Hope area and he graduated from Fennimore High School. He attended the University of Wisconsin-Platteville and earned his teaching degree. He taught history and drivers education in Darlington and Dodgeville and coached wrestling and football. Royce decided that a career running his own business was his true dream and had left teaching to be an entrepreneur. The first business was Montfort Implement. He then moved on to purchase Paint Plus/DECO Supply and ran the business in Dodgeville for 35 years before selling it in 2015. On April 9,1966, Royce married the love of his life, Beverly Needham Reukauf and they recently celebrated their 50th wedding anniversary. They had two children, Eric and Shelley and spent many years attending their high school and college events. The greatest joy was spending time with his five grandchildren - Courtney, MacKenzie, Brett, Ben and Sam. His family was the center of his life and every one of us knew how much he loved and cared for his family. Just as he did with his children, Royce attended every possible event and activity that his grandchildren were involved in. In addition to spending time with his family, Royce enjoyed spending time at his land and the camper he and Beverly have by Castle Rock Lake. He shared his love of sports, hunting, and fishing with his children and grandchildren. The camper was there special get away from the store. Royce and Beverly enjoyed playing cards and spending time with their campground friends. We joked with him that as he grew older, he never shot at the turkeys or deer. Royce truly appreciated nature and watching the wildlife in their habitat, which is why we never let him drive outside of the city limits. Royce is survived by his wife of 50 years, Beverly, his son Eric (Sue), his daughter Shelley (special friend Brad), his grandchildren Courtney, MacKenzie, Brett, Ben and Sam. He is also survived by his siblings: Mary Lou Reukauf, Roger (Thelma) Reukauf, Lois (Dan) Taylor, Vicki (Gary) Robinson, and Wanda Reukauf Hooks. In addition, Beverly's siblings: Max (Patsy) Needham and Betty (Bob) Gleason, and many nieces and nephews on both sides of the family. Royce was preceded in death by his parents, Karl and Edna Reukauf, his in-laws, Max and Eleanor Needham, and his brother-in-law and sister-in-law, Bill and Pam Needham. A celebration of life will be held at 11:00 am on Friday, September 30, 2016 at GRACE LUTHERAN CHURCH, in Dodgeville. Reverend Mark Williamson will officiate. Friends may call from 4:00 – 8:00 pm on Thursday at GORGEN-McGINLEY & AYERS FUNERAL HOME and also from 10:00 am until time of service on Friday at the church. Royce will be deeply missed on Earth, but will remain in our hearts forever.

Dodgeville, WI &#8211; Royce Charles Reukauf, age 75, of Dodgeville, passed away peacefully on Monday, September 26, 2016, at his home surrounded by his loving family. Royce was born on August 30, 1941 in Mt. Hope, Wisconsin to Karl and Edna... View Obituary & Service Information

The family of Royce C. Reukauf created this Life Tributes page to make it easy to share your memories.

Send flowers to the Reukauf family.