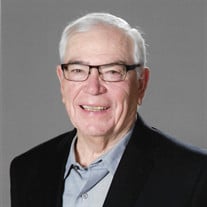 Mineral Point - Ronald E. Murphy, age 79, passed away peacefully after a short illness on November 28, 2020, surrounded by his loving family at St. Mary’s Hospital. Ron was born on July 8, 1941, in Dodgeville, the son of Ernest and Ruth (Richards) Murphy. Ron grew up in Dodgeville, attending Dodgeville High School where he excelled on both the baseball diamond and football field, earning first team all-state honors in football in 1958. After graduation in 1959, Ron went on to play football at UW-Platteville and graduated with a Bachelor’s of Education in 1964. He married the love of his life, Linda Lieder on June 8, 1968 and the two of them raised three sons and enjoyed a strong faith-based marriage of 52 incredible years through the time of his passing. Ron was a beloved teacher in the Mineral Point School District for 37 years, teaching Physical Education and Driver’s Education. After his retirement from teaching in 2002, he continued to be the Driver’s Ed instructor through 2013. Although Ron was an amazing teacher, most people in Mineral Point will remember him as “Coach” Murphy. During his time at Mineral Point High School, he spent 5 years coaching JV basketball and 30 years as the assistant baseball coach. He also coached Little League baseball along with his great friend, Greg Gorgen, so the Murphy and Gorgen boys could play together. Coach Murphy, however, is most well-known for being the head football coach at Mineral Point High School, a position he held for 32 years until his retirement from coaching in 2000. He was a dedicated coach who taught his players the value of teamwork, discipline, and how to play the game the right way. In 2000, Ron was inducted into the Wisconsin Football Coaches Association Hall of Fame, along with his brother, Dennis, the head coach at Black Hawk High School. Shortly after in 2005, Ron became a charter member of the Mineral Point Gridiron Hall of Fame. Then in 2011, Ron was inducted into the Dodgeville Athletic Hall of Fame. Ron Murphy loved his role as a coach and teacher for so many years, but he would be the first to tell you the most important job in his life was being a good husband, father, and grandfather. He excelled in all three of these roles beyond measure. As a husband, Ron was patient, attentive, and loving. He always put his wife’s needs ahead of his own and loved her with every ounce of his being. As a father, Ron was always there for his three boys, Pat, Mike and Brian. He had the pleasure of coaching all three sons on their youth and high school sports teams, creating a special bond through sports. Ron was an incredible role model for his boys, leading by example on how to be loyal, driven, and love unconditionally. As a grandfather, Ron took great pride in watching his grandchildren do what they love. Ron is survived by his loving wife, Linda, sons, Pat (Brenda Seagreaves), Mike, and Brian (Angie) Murphy, grandchildren Austin (Mia), Paige, Gabi, Megan, Andrew, Chloe and Cade, and one great-grandchild arriving in May. He is also survived by his brother, Dennis (Millie) Murphy and sisters, Jean (Bruce) Thomas, Betty (Den) Phillips, and Mary Esch. His surviving in-laws are Tom (Terri) Lieder, Steven (Diane) Lieder, Jim (Mary) Lieder, and Mary (Scott) Harper, mother-in-law, Joyce Flum, and many nieces and nephews. He was preceded in death by his parents Ernest and Ruth Murphy and in-laws, Bud Lieder and Robert Flum and brother-in-law John Esch. A Private Family Mass of Christian Burial will be held on Friday, December 4, 2020 at Ss. MARY & PAUL CATHOLIC CHURCH in Mineral Point. The Funeral will be live-streamed thru the St Mary & Paul's Church Facebook page starting at 12:45 p.m. on the link below: http://www.facebook.com/pages/category/Religious-Organization/Congregation-of-St-Marys-St-Pauls-113542338679461/ Burial will be in St Mary's Cemetery at a later date. A public visitation will be held on Friday from 10:00 a.m. until 12:30 p.m. at Ss. MARY & PAUL CATHOLIC CHURCH in Mineral Point where masks and social distancing is required. In lieu of flowers, memorials may be made to the family that will be used at a later date to support the Mineral Point Community in Ron’s name or can be mailed to the Gorgen Funeral Home. In addition, the family asks that you would engage in a random act of kindness this holiday season in Ron’s memory because he was one of the kindest souls we have ever known. Although he is no longer with us in body, his spirit of kindness can live on in all of us.

Mineral Point - Ronald E. Murphy, age 79, passed away peacefully after a short illness on November 28, 2020, surrounded by his loving family at St. Mary&#8217;s Hospital. Ron was born on July 8, 1941, in Dodgeville, the son of Ernest and Ruth... View Obituary & Service Information

The family of Ronald "Ron" Eugene Murphy created this Life Tributes page to make it easy to share your memories.