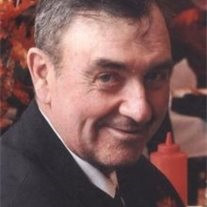 Dodgeville - Roger W. Oxnem, age 68, of Dodgeville, beloved husband, father and grandfather passed away on Thursday, August 23, 2012 at his home after a short illness. Roger was born on September 24, 1943 in Dodgeville to LaVern and Grace (Dunn) Oxnem. He was raised on a small dairy farm outside of Dodgeville on Oxnem Road and attended Dodgeville High School, where he graduated in 1961. In 1964, he married Donna Wagner and they lived on a dairy farm in Dodgeville. Donna passed away unexpectedly in 1973. On October 29, 1977, he married Marge Palmer and they ran a farm together on Oxnem Road next door to his parent's farm. There they raised two children, Jay and Julie. Roger was a true farmer; he lived and breathed the farm. He had a huge love and respect for the land, his cows and his family. He knew just how to take care of each of them with a gentle hand and strong will. Roger loved antique tractors; he built several of them from the ground up. To help share his love of tractors he started an organization called the Community Antique Tractor Pullers Club. For years he spent his weekends going to pulls in the area, showing everyone what an old John Deere can do. From many of those years he was president of the club. In the winter months he enjoyed snowmobiling with his friends in a snowmobile club. They spent many days and nights riding the local trails in the area. Roger enjoyed listening to music; he loved to hear a country band. He would spend hours watching country music videos on television. Most of all Roger loved spending time with his family and most recently his grandchildren. Roger was preceded in death by his parents, LaVern and Grace Oxnem, his grandparents, John and Ada Oxnem and Beulah and William Dunn, his first wife, Donna and his brother-in-law, Tom Palmer. Roger is survived by his wife, Marge; his children, Jay (Amy Jo) Oxnem and Julie (Phil) Udelhoven; his six grandchildren, Kelsey, Grace and Aubrey Oxnem and Alexis, Jade and Samantha Udelhoven; his siblings, Lee (Mary Lou) Oxnem, Joanne Oxnem and John (Bonnie) Oxnem, all of Dodgeville; his sister-in-law, Jan Palmer, of Oregon; his brothers-in-law, Jo (JoAnn) Palmer, of Eatonville, Washington and Steve (Lynette) Palmer, of Verona; several cousins, nieces and nephews. Funeral services will be held at 11:00 a.m. on Tuesday, August 28, 2012 at DODGEVILLE UNITED METHODIST CHURCH. Pastor Rom Pegram will officiate. Burial will be held in East Side Cemetery. Friends may call from 4:00 p.m. until 8:00 p.m. on Monday at the GORGEN-McGINLEY & AYERS FUNERAL HOME in Dodgeville and from 10:00 a.m. until time of services on Tuesday at the church.

Dodgeville - Roger W. Oxnem, age 68, of Dodgeville, beloved husband, father and grandfather passed away on Thursday, August 23, 2012 at his home after a short illness. Roger was born on September 24, 1943 in Dodgeville to LaVern and Grace (Dunn)... View Obituary & Service Information

The family of Roger W. Oxnem created this Life Tributes page to make it easy to share your memories.

Send flowers to the Oxnem family.