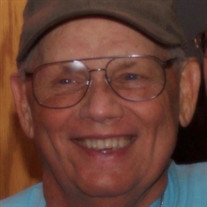 Edmund / Beloit – Robert W. Edgecomb, age 79, of Edmund and formerly of Beloit, died peacefully on Saturday, October 17, 2020 at his home surrounded by his family. He was born on June 18, 1941 in Boscobel, a son of Delbert and Ida Edgecomb. Bob was a 1960 graduate of Beloit High School. He married Gerry Bomkamp on February 26, 1999 in Dodgeville. Bob was formerly employed by Chrysler Motors, Beloit College and White and Sundstrand. He was an avid hunter, especially white-tailed deer. He enjoyed playing cards, euchre and shooting pool. He was a Pittsburgh Steelers fan and enjoyed spending time with family, especially his grandkids. Bob is survived by his loving wife Gerry; his sons Troy (Ann) of Beloit and Craig (Tina) of Janesville; his step children Mathew Bomkamp of Edmund, Eric Bomkamp of Highland, April (Shawn) Luthy of Cadillac, MI and Samantha (Josh) Elarde of Edmund; his grandchildren Jayme, Ashley M, Andrew, Lindsay, Ashley E, Shawn, Jr., David, Natalie, Courtney, Nathan, Austin, Hailey, Bella, Ryan and Jaylynn; nine great grandchildren; his sisters Delpha Groom of South Beloit, IL, Virginia Daugherty of Woodbury, MN, Karen Sheehan of The Villages, FL and Vicki Larson of Lake Havasu City, AZ; his sisters-in-law Vickie Muth of Rhinelander and Laurie Langdok of Las Vegas, NV; his father-in-law Ken Langdok of Glidden, WI; his mother-in-law Mary Kutzke of Verona; other relatives and friends. He was preceded in death by his parents, infant sister Dorothy, his sister Shirley Wolfe and his brother-in-law Chris Bernard. A Public Visitation will be held from 4:00 p.m. until 6:00 p.m. on Tuesday at the GORGEN-McGINLEY & AYERS FUNERAL HOME in Dodgeville. Due to Wisconsin’s public health mandate, masks are to be worn during the duration of your visit inside of the funeral home and that you practice proper social distancing guidelines. A Private Family Service will follow. In lieu of flowers, memorials may be made to Upland Hills Hospice. The family would like to give a special thank you to Upland Hills Hospice, who cared for Bob through is illness.

Edmund / Beloit &#8211; Robert W. Edgecomb, age 79, of Edmund and formerly of Beloit, died peacefully on Saturday, October 17, 2020 at his home surrounded by his family. He was born on June 18, 1941 in Boscobel, a son of Delbert and Ida Edgecomb.... View Obituary & Service Information

The family of Robert W. "Bob" Edgecomb created this Life Tributes page to make it easy to share your memories.

Send flowers to the Edgecomb family.