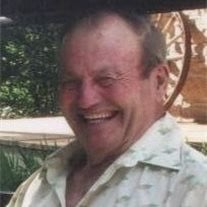 Dodgeville - Robert John Trace, age 84, of Dodgeville, passed away peacefully the morning of Saturday, November 17, 2012 at his son's home. He was born on February 4, 1928 in Dodgeville, Wisconsin and was one of 13 children born to John and Mary (Steffes) Trace. He was raised on the family farms in Calamine and Dodgeville Wisconsin. He married the love of his life Sharon Elaine Crume on June 3, 1953 at St. Joseph's Catholic Church in Dodgeville and was married for 56 years until her passing in 2009. In their younger years, he and his wife enjoyed square dancing, their land, and many friends. Bob's occupation as owner and operator of a portable feed mill for twenty-one years was successful and physical, and he went on to work for the Iowa County Highway department for another twenty-one years, until his retirement. Memories will be of John Deere's, objects painted in John Deere green and yellow, his kindness, smile, and his way of teasing those he cared for. He especially enjoyed his grandchildren, and he will be greatly missed by his family and friends. Bob is survived by five of his six children, John (Ann) Trace of Linden, Mary (Dave) Ganshert of Seminole, FL., Steve (Sue) Trace of DeForest, Dennis (Karen) Trace of Dodgeville, Michelle (Doug) Jewell of Verona; his daughter-in-law, Chris Trace of Dodgeville; fifteen grandchildren; ten great-grandchildren; special friend, Wilma Dolan. He is also survived by his siblings, Genrose (Wilbur) Evans, Gertrude (Robert) Houselog, Edward (Catherine) Trace, Eugene Trace, Aletha (Jim) Duerst, Elaine Rundle, and Joanne (John) Brunner. Several brother-in-laws and sister-in-laws: Dallas Millard, Carol Potterton, Aggie Trace, Mike Crume and Mavis Tortorice. He was preceded in death by his wife, parents, his son, Joseph Trace (1985), his brothers, Leo, Bill, and Richard, his sisters, Virginia and Rita Millard, his in-laws, Herman and Ruby Crume, his brothers-in-law, Jerry Rundle and Garth Crume. A Memorial Mass of Christian Burial will be celebrated at 11:30 a.m. on Wednesday, November 21, 2012 at ST. JOSEPH'S CATHOLIC CHURCH in Dodgeville. Father Patrick Wendler will officiate. Friends may call from 4:00 p.m. until 8:00 p.m. on Tuesday at the GORGEN-McGINLEY & AYERS FUNERAL HOME in Dodgeville and from 10:30 a.m. until time of Mass on Wednesday at the church. In lieu of flowers, memorials can be made to St. Joseph's School Trust Fund and Upland Hills Hospice.

Dodgeville - Robert John Trace, age 84, of Dodgeville, passed away peacefully the morning of Saturday, November 17, 2012 at his son's home. He was born on February 4, 1928 in Dodgeville, Wisconsin and was one of 13 children born to John and... View Obituary & Service Information

The family of Robert J. Trace created this Life Tributes page to make it easy to share your memories.

Send flowers to the Trace family.