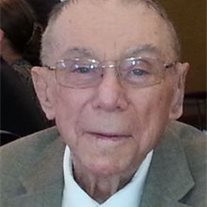 Mineral Point - Robert F. Terrill, age 85, of Mineral Point passed away peacefully surrounded by his loving family on Saturday, April 18, 2015 at Upland Hills Nursing and Rehab Center in Dodgeville. He was born in Dodgeville on April 23, 1929 the son of John Floyd and Rella Mae (Ferrell) Terrill. He graduated from Mineral Point High School in 1947 and never missed an alumni dinner. He married Janice Anne Maynard on May 24, 1950 at the Hope Lutheran Church in Mineral Point. He was a lifelong farmer in the Mineral Point area and has an extensive collection of toy tractors. In 2001 they moved to Lake Redstone and returned to Mineral Point in 2006. Bob`s passion was enjoying sports or any activity that involved the children, grandchildren our great·grandchildren. He was a member of Odd Fellow Lodge #1 in Mineral Point, was a past Booster Club president and a member of the Mineral Point wrestling Hall of Fame. Bob is survived by his children; Tim (Ann) Terrill of Waldwick, Ted (Cindy) Terrill of Mineral Point, Terry (Sue) Terrill of Westminster, CO, and Vicky (Roger) Jaeger of Decorah, IA; 12 grandchildren, 16 great-grandchildren, a brother Dean (Mary) Terrill of Dodgeville, and many nieces, nephews, relatives, friends, and his special caregiver Marilyn Dunn. He is preceded in death by his parents, his wife Janice on September 15, 2014, and a grandson Thomas Terrill on November 26, 2014. Funeral Services will be held on Wednesday, April 22, 2015 at 10:30 a.m. at the HOPE LUTHERAN CHURCH in Mineral Point. Pastor Rich McLeer will officiate. Burial will be in Graceland Cemetery. A visitation will be held on Tuesday, April 21, 2015 from 4:00 until 8:00 p.m. at the GORGEN FUNERAL HOME in Mineral Point and on Wednesday from 9:30 until 10:20 a.m. at the church. In lieu of flowers, memorials may be given to IOOF #1, Hope Lutheran Church or Upland Hills Hospice.

Mineral Point - Robert F. Terrill, age 85, of Mineral Point passed away peacefully surrounded by his loving family on Saturday, April 18, 2015 at Upland Hills Nursing and Rehab Center in Dodgeville. He was born in Dodgeville on April 23, 1929... View Obituary & Service Information

The family of Robert F. Terrill created this Life Tributes page to make it easy to share your memories.

Send flowers to the Terrill family.