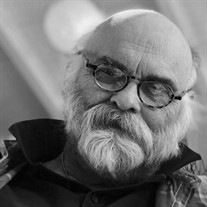 Mineral Point / Milwaukee - Robert Edward Polikowski, age 73, of Mineral Point, formerly of Milwaukee, passed away on Wednesday, February 10, 2021. "Bobby" was the first of four children of Eleanor and Edward Polikowski. Born on the south side of Milwaukee in 1947, he lived in Bay View until age 11, when the family moved into a home in Greenfield, designed by his father. Bob was passionate about politics and social justice issues from a young age, marching with the NAACP in support of Eugene McCarthy in 1968. He met his wife Peggy at W. A. Krueger Company, during the summer of 1967, both working to earn their college tuition. They were married in 1971 in Wauwatosa. Throughout his life Bob was an avid music-lover, voracious reader, and history buff. Working over 30 years for the City of Milwaukee as a programmer/analyst, he enjoyed the challenge of building data systems and mapping neighborhoods working with the DIME file. He was a prolific photographer and road-tripper, almost never appearing in a photograph without a camera in-hand. Peggy and Bob discovered Mineral Point, WI in the early to mid-eighties on their way to another historic town, Galena. Year after year, they returned to Mineral Point, drawn to the burgeoning art community and historically unique stone architecture. Retiring in 2010, they bought their dream home, an 1845 stone house, now on the WI State Historic Register. Bob is survived by his beloved wife Peggy; their cherished son Jonathan (Alison Gilbert); treasured grandchildren Ruby and Noah; his ­loving brother Jim (Ruthanne Chun); his brother-in-law Mark Majewski; nieces, nephews, grand nieces and grand nephews. He was preceded in death by parents Eleanor and Edward Polikowski, and his dear sisters, Susy Majewski and Linda Deinken (Bill). The family suggests that donations be made in his name to Planned Parenthood or the Mineral Point Historical Society.

The family of Robert Edward Polikowski created this Life Tributes page to make it easy to share your memories.

Send flowers to the Polikowski family.