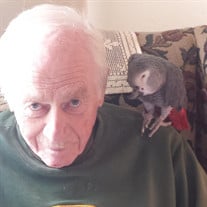 Robert Theodore (Ted) Landon, ( June 30, 1939 – February 15, 2022)   Theodore Landon passed away peacefully, on February 15, 2022, with family at his side.   Ted grew up on the Landon Mink Ranch in Williams Bay, Wisconsin, where he was rarely seen without a Saint Bernard dog by his side. Theodore was a graduate of both Wayland Academy at Beaver Dam, Wisconsin, and Brown University - Providence, Rhode Island, where he majored in Art and also studied Economics and Psychology. He received the 1962 Gilbert Stuart Award in art while attending Brown University. He also attended the Rhode Island School of Design.   Upon his graduation from Brown University Ted canoed down the Mississippi, camping out on the river from Galena to St. Louis.   Upon his return to Williams Bay he worked for the family business as the Art Director designing pet food packaging. He opened the Art and Antique shop in downtown Williams Bay and while there learned of a small, historic mining town in southwest Wisconsin called Mineral Point.  Ted fell in love with Mineral Point, and became one of the first artists to settle there. For three years he worked as a Social Worker for the local for the welfare agency.  Then he moved on to work for an adult education outreach project developed by Wisconsin Public Television. In 1964 at the age of 22, Ted purchased the Walker House, which had been abandoned since 1957.  His restoration efforts took about 10 years.  He also worked on restoring the Moses Strong House along with several other historic buildings.  Ted fell in love with the Cornish stonework in Mineral Point – so much so, that he learned how to quarry and split local stone, going on to build several beautiful stone homes around town in the Prairie Style popularized by Frank Lloyd Wright.  Ted's appreciation for nature is evident in his artwork by the soft, sensitive expressions of colors, patterns, and landscapes, which he interprets uniquely in graphics and oil paintings. His oil paintings emphasize a strong color harmony, capturing the beautiful southwestern Wisconsin countryside, rolling hills, town scenes, and people of southwest Wisconsin.  Early on in his art career, he carved etchings (copper plates) which were used as a press to create images on paper.  They featured Mineral Point historic buildings, local surroundings, scenes, and people. Ted appreciated all of the different characters in Mineral Point, and if you saw him in the pool hall, you may have ended up in one of his etchings.  Second only to his artwork was his love of playing piano, which he did most every day. He would play for hours composing his own music. He would spend hours playing his baby grand piano while his African Grey Parrot, ‘Birdie’ sat on his shoulder, often saying, "That’s pretty Ted." Another of Ted's favorite activities was attending the live plays in Spring Green at the American Players Theater, where he was a season ticket holder. He also enjoyed planting a garden each spring. He had a variety of vegetables: bok choy, tomatoes, peppers, lettuces, potatoes, carrots, green beans.   He is survived by his two children, Adam (Crystal and their two children Naidah and Brynlee) of Menasha, WI, and Mathew of Platteville, WI; and his former spouse Kathie Landon Kelly of Mineral Point, WI. A Celebration of Ted's life will be held on Friday, February 25, 2022 from 3:00 - 6:00 PM at the Gorgen Funeral Home in Mineral Point.  With the loss of Ted, the community has lost another of it’s originals. As most know, Ted did things his way. As he would say, " I like life in the slow lane; it suits my nature."

The family of Robert Theodore "Ted" Landon created this Life Tributes page to make it easy to share your memories.

Send flowers to the Landon family.