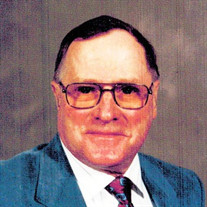 Mineral Point - Robert P. Knudson, age 90 of Mineral Point died on Wednesday, January 1, 2020 at Mineral Point Care Center. Bob and his twin brother Jim were born November 6, 1929 to Peter and Nellie (Shreve) Knudson. At age 9 his family moved to Mineral Point, where he spent the rest of his life except for 2 years spent in the Army. In his early teens he befriended Dale Cline where he learned the electric motor business, which he bought in 1959. He served Southwest Wisconsin and Northern Illinois repairing electric motors for 35 years as Knudson Motor Service. On May 5, 1955 he married Lois Thomas. They had two children Mark and Mary. Bob built their home beginning in 1956. In retirement he turned his skills to woodworking making many pieces of furniture and accessories. He is survived by his wife Lois of Mineral Point, children Mark (Maria) of Rochester, New York and Mary of Mineral Point. He is further survived by special friends of the family of Reverend Herb and Louise Thompson, sisters-in-law; Joan Knudson and Twila Thomas. He is survived by many nieces, nephews, relatives and friends. He was preceded in death by his parents, in-laws; Willie and Emily (Jones) Thomas, sisters Thelma Knudson, Dorothy (Charles) Hunter, Blanche (George) Satkoff, brothers Harry (Bernice), Elwood (Joyce), Don, Jim (Ag) Knudson, brothers-in-law, Bill (Gladys), Gordon, Robert, and Spencer Thomas. A Memorial Service will be held on Monday, January 6, 2020 at 11:00 a.m. at the First United Methodist Church in Mineral Point. Pastor Marilyn Brewer will officiate. Inurnment will be at a later date in Eastside Cemetery in Dodgeville. A visitation will be held on Sunday, January 5, 2020 from 1:00 until 4:00 p.m. at the Gorgen Funeral Home in Mineral Point and on Monday from 10:00 until 11:00 a.m. at the church. In lieu of flowers, memorials to Mineral Point Rescue Squad, the Mineral Point Fire Department, or The First United Methodist Church of Mineral Point are appreciated

The family of Robert Peter Knudson created this Life Tributes page to make it easy to share your memories.

Send flowers to the Knudson family.