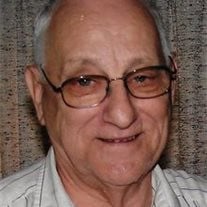 Dodgeville - Robert "Bob" Lee Fleming, age 83, of Dodgeville, WI passed away peacefully in his sleep on December 21, 2016 at Upland Hills Hospital in Dodgeville, WI. Bob was born in Mountain Grove, Mo on October 28, 1933 to his parents Cleo and Bessie Fleming. Later in life his father married Georgia Holtzclaw. Bob lived in Missouri for a time, then moved to Iowa and worked at the University of Iowa Hospital as a lab technician for 26 years. In 1972 he became one of Jehovah's Witnesses. On August 2, 1975 he married the joy of his life, Joycelyn Dusenberry. Bob and Joy were married for 41 years. Bob believed in Jehovah God's promise of the resurrection and looked forward to living in the paradise free of sickness and death. Rev 21:3,4. He often shared the hope of God's Kingdom and its promises with others. He loved crossword and jigsaw puzzles, St Louis Cardinals baseball, Dr. Pepper and Ding Dong cupcakes! Bob is survived by his wife Joy, son Jim Fleming (Iowa) and daughter Teri (Michael) Riegel from a previous marriage, four stepdaughters, Kay Holland, Shelley (Michael) Dziak, Saundra (Michael) Wilcox and Carol Dusenberry. Bob had many brothers, two sisters, 3 nieces, JoAnna (Jon) Poole, Sandra Jaegar and Debra Butters, nephew William Preston and sister in law Betty (Bill) Preston and many grand- and great-grandchildren. A Memorial Service will be held for Bob on Saturday January 7, 2017 at 3 PM at the Kingdom Hall of Jehovah's Witnesses, 3265 Lehner Rd., Dodgeville, WI. In lieu of flowers, donations can be made to Upland Hills Hospice, 800 Compassion Way, Dodgeville, WI 53533 in appreciation of the compassionate care they gave Bob in his final days.

The family of Robert "Bob" Fleming created this Life Tributes page to make it easy to share your memories.

Send flowers to the Fleming family.