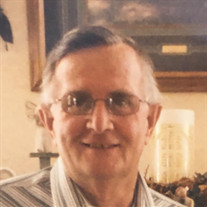 Mineral Point - Richard W. "Dick" U'Ren, age 74, of Mineral Point passed away peacefully on Saturday, July 20, 2019 at his home. He was born on March 21, 1945 the son of Homer and Elizabeth (Casey) U'Ren. Dick was born and raised in Mineral Point and spent his entire life there. On August 22, 1964 he married Elaine Dolphin and together they raised four children. They started out farming in the Mineral Point area but soon moved to town. Dick worked at Nelson Muffler/Cummins for 34 years. He also hauled milk for many farmers and companies in the area for over 50 years, which gave him the opportunity to keep in touch with the farming life as he was still a farmboy at heart. Dick enjoyed taking "Maddie" (his dog) for coffee and car rides. He enjoyed the simple things in life, camping, corvettes and lazy days lounging with Hunter. Everyone who knew him, knew he had the "gift to gab" and could enjoy a conversation with a complete stranger. He is survived by his wife Elaine, his children; Mary (Joe) Christianson, Lauri (Terry) Lauffer, Jason (Tara) U'Ren and Kelly U'Ren, grandchildren Jennifer (Joe) Keyes, Dustin (Autumn) Radke, Casey (Breanna) Radke, Katelynn (Wes Ellery) Gordon and Annika U'Ren; and eight great-grandchildren. He is further survived by his father Homer U'Ren of Mineral Point, brother Michael (Nancy) U'Ren of Oregon, and a sister Patricia (Robert) Coogan of Mineral Point. He is preceded in death by his mother Elizabeth U'Ren, in-laws Ted and Melva Dolphin, and his grandson and lounging buddy Hunter Gordon. A Memorial Service will be held on Saturday, July 27, 2019 at 12:00 noon at the CONGREGATIONAL UNITED CHURCH OF CHRIST in Mineral Point. Pastor Rich McLeer will officiate. Burial will be in St. Paul's Cemetery at a later date. A visitation will be held on Saturday from 9:00 a.m. until time of service at the church.

Mineral Point - Richard W. "Dick" U'Ren, age 74, of Mineral Point passed away peacefully on Saturday, July 20, 2019 at his home. He was born on March 21, 1945 the son of Homer and Elizabeth (Casey) U'Ren. Dick was born and raised in Mineral... View Obituary & Service Information

The family of Richard W. U'Ren "Dick" created this Life Tributes page to make it easy to share your memories.

Send flowers to the U'Ren family.