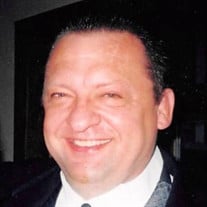 Mineral Point - Richard A. Lawinger, age 67, of Mineral Point, passed away peacefully on Tuesday, July 21, 2020 at Upland Hills Nursing and Rehab in Dodgeville. He was born to Bill and Helena (Salzmann) Lawinger on July 30, 1952. He grew up... View Obituary & Service Information

The family of Richard A. Lawinger created this Life Tributes page to make it easy to share your memories.

Send flowers to the Lawinger family.