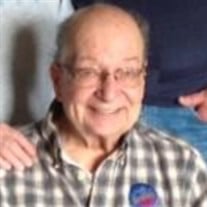 Richard Carl (Cheesey) Christen passed away peacefully on May 10, 2022 at the Lafayette Manor in Darlington WI at the age of 87. Dick was born on April 9, 1935 to Eva and Carl Christen. He spent his younger years in Primrose township, where the family made swiss cheese at the Primrose Center Cheese Factory until 1951 when the family moved to Mineral Point and opened the American Swiss Cheese Company. Dick was a hard worker and would talk about his days of setting pins at the Slick Clark's Bowling Alley. He also worked as a sanitation worker for the City of Mineral Point. He worked at Nelson Muffler Plant for over 25 years. While working there Dick received a plaque for working eight years without missing a single day of work. Dick attended the Hodan Center and was very proud of his time there. After the loss of his beloved mother he resided at two different assisted living facilities. In 2018 he became a resident at the Bloomfield Manor in Dodgeville where he remained until its closure in 2022. He had recently been transferred to the Lafayette Manor. Dick is survived by his brother Arnold (Donnie Severtson), Mineral Point; two nieces Tonia Christen, Stoughton and Christine (Timm) Tuescher, Darlington; great nephew's Chad Pien, Blanchardville, Jake Tuescher, Darlington; great nieces Morgan (Alex) Schauff, Stoughton and Emma Tuescher, Darlington and great, great nephew Barrett Schauff (Stoughton). Dick was preceded in death by his mother Eva Clarinda Christen, father Carl Christen, and brother Clark Dennis Christen. Maternal Grandparents Albert and Clarinda Clark and Paternal Grandparents Carl and Rosina Christen. A private family service will take place at a later date. Burial will be in Eastside Cemetery in Dodgeville. Memorials may be made to the Hodan Community Services in Mineral Point in Dick's name.

Richard Carl (Cheesey) Christen passed away peacefully on May 10, 2022 at the Lafayette Manor in Darlington WI at the age of 87. Dick was born on April 9, 1935 to Eva and Carl Christen. He spent his younger years in Primrose township, where... View Obituary & Service Information

The family of Richard C. "Dick" Christen created this Life Tributes page to make it easy to share your memories.

Richard Carl (Cheesey) Christen passed away peacefully on May...

Send flowers to the Christen family.