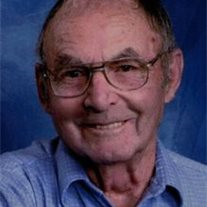 Dodgeville - Raymond W. Pittz, age 87, of Dodgeville, passed away peacefully on Friday, July 28, 2017 at his home. Ray was born on June 25, 1930 on the family farm in Mineral Point, WI, to Aloys and Katherine (Palzkill) Pittz. Ray graduated from Mineral Point High School in 1948 and then worked on the family farm until age 25. In 1955, Ray enlisted in the US Army where he served as a communications specialist during the Korean War. After returning from the war, Ray married Marilyn Hennessey in 1957 and she preceded him in death in 1995. They lived their married life in Dodgeville. To this union they raised three sons. Ray went on to work for Leo Hennessey & Sons for 27 years as the farm manager. He then went on to work for Dodgeville Agri Service for 11 years and then Thuli Tables until his retirement in 2010 at the age of 80. Ray was most proud of his sons and coached them in Little League throughout their youth winning many baseball games. Ray was instrumental in starting a Knight's of Columbus 4th Degree. Ray was very active as a member of the St. Joseph Catholic Church, serving on numerous boards, including breaking ground for the new church. Ray loved to work in his garden, lawn and flower beds. There was nothing he didn't want to tackle. Ray's passion was fishing. He enjoyed many hours in the boat out at Governor Dodge with his fishing buddy, Mike Martin. Every spring Ray and his son, Mike, would venture off to Northern Wisconsin for a week of fishing. He cherished deer hunting on the family land every year with his sons and cooking hotdogs with the grandsons. Ray was most proud of his grandchildren and enjoyed attending many of their activities. Ray is survived three sons, Mike (Donna), and Patrick, all of Dodgeville, Carl (Barb) of Waukesha; his grandchildren Megan, Zachary, Matthew and Noah. Also surviving are his sisters Marian O'Brien of Rockford, IL and Sister Alice Pittz of Racine. He was preceded in death by his parents, his brother Ralph, and his sister Betty Radtke and other relatives. A Mass of Christian Burial will be held at 11:00 a.m. on Wednesday, August 2, 2017 at ST. JOSEPH'S CATHOLIC CHURCH in Dodgeville. Burial will be held in St. Joseph's Cemetery. Friends may call from 4:00 p.m. until 8:00 p.m. on Tuesday at the GORGEN-McGINLEY & AYERS FUNERAL HOME in Dodgeville, where a Knight's of Columbus Rosary service will be held at 8:00 p.m. Friends may also call from 9:30 a.m. until 10:30 a.m. on Wednesday at the funeral home. The family wishes to express their deepest appreciation to Mike and Bob Zimmerman for their countless trips and plane rides, Dan Kitelinger for his many visits and also to Dr. Gary Grunow. In lieu of flowers, family suggest memorials be made to the St. Joseph Catholic Church in Dodgeville.

The family of Raymond W. Pittz created this Life Tributes page to make it easy to share your memories.

Send flowers to the Pittz family.