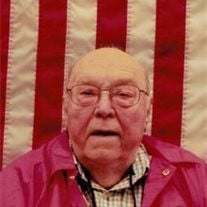 Another World War II Veteran has gone home. Mineral Point - Raymond Herbert Hanson, age 96, passed into eternal life on July 25, 2016 surrounded by his loving family after a brief illness at Upland Hills Hospital in Dodgeville, Wisconsin. He was born on November 17, 1919 along with his twin brother, Reuben. They were 5 and 6 of 10 children born to Albert and Bessie Hanson. Ray moved to Mineral Point with his parents in 1933, graduating from Mineral Point High School in 1937. Jobs being scarce, Ray and his brothers worked as farm hands. Later on Ray started working for Wisconsin Power and Light. In June of 1942 he was drafted and served in the Asiatic Pacific on the Aleutian Islands for 26 months during World War II as a heavy equipment operator building roads and airport runways. In 1945, he returned home and resumed work at WP&L. On August 31, 1948, Ray married Isabell Powell at the First United Methodist Church in Mineral Point. Ray retired from WP&L at the age of 68, after working there for 37 years as a engineering technician. While working, he served as secretary for the WP&L Union. He was involved with Lions and Odd Fellows in Mineral Point. Receiving many awards for his contributions. While his boys were young, Ray was very involved in Boy Scouts. Serving first as an assistant Scout Master for 7 or 8 years and later as Scout Master for 4 or 5 more years. Ray and Isabell, along with a group of people, started the Faith Lutheran Church in Mineral Point. The chuch and faith community became a big part of their lives. Ray was always good at working with his hands. Building their first home in Mineral Point and helping build the new Hope Lutheran Church. He was also involved in getting repair work done at their new church. He spent many hours working with other legionnaires remodeling the clubhouse and camps. He is a lifetime member of both the American Legion and Veterans of Foreign Wars. Over the years he had served in many capacities including commander of the Mineral Point Post 170 and as Vice Commander of the 3rd District. Raymond H. Hanson is survived by his children: David (Suzy), Monona, Cheryl Hanson-Liu, Evansville, Kevin, Mineral Point and Eric (Renee) Dodgeville. 9 grandchildren: Adrienne (Greg) Allen and Aeriond Liu, Kirsten and Christopher Hanson, Lexie and Rebecca Teschan, Gregory and Jacob Hanson and Dana Hanson and one great-grandchild Matthew Teschan. Brothers Al (Ruth) Hanson, Marvin (Phyllis) Hanson, sisters-in-law Lucille (Reuben) Hanson, Genevieve Peplinski, Patricia Powell, Francis Powell, Marion Hunter, Margaret (Bill) Heins, brother-in-law Merle Uren, Clarence Schill and many nieces, nephews and other relatives. He was preceded in death by his parents; 2 brothers, Curtis and Reuben, 5 sisters, Gladys Thorison, Edna Whitford, Annabelle Cutler, Grace Roberts and Norma Schill, 9 brothers-in-law, Cletus Roberts, Clarence Thorison, Jim Whitford, Mike Cutler, Robert and Donald Powell, Larry Martin, Thomas Hunter, Joe Peplinski, 4 sisters-in-law Phoebe Hanson, Darlene Uren, Bernice Martin, Rachel Powell. Funeral services will be held at 11:00 a.m. on Friday, July 29,2016 at FAITH LUTHERAN CHURCH in Mineral Point. Rev. Cal Schaver will officiate. Burial will be held in Graceland Cemetery with Military Graveside Rites accorded by the Mineral Point American Legion. Family and friends may call from 9:00-11:00 a.m. on Friday at Faith Lutheran Church in Mineral Point. We would like to thank the nurses, doctors and staff at Bloomfield HealthCare Center and Upland Hills Hospital for the wonderful care they provided to dad and our family.

The family of Raymond H. Hanson created this Life Tributes page to make it easy to share your memories.

Send flowers to the Hanson family.