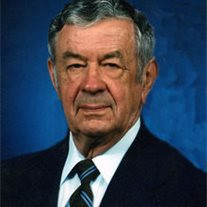 Dodgeville - Raymond A. Gevelinger, age 86, of Dodgeville, died unexpectedly, but peacefully on Wednesday, August 1, 2012 at his home. Ray is survived by Eleanor (McGraw), his wife of 58 years; his four children: Marcia (Don) Bastian and grandchildren: Alex and Eleana, Cindy (Wayne) Pulley and granddaughter Hannah, Greg (Julie Lehner-Gevelinger) and grandchildren: Nathan, Brehan and Zach, Jan (Pat) Davies and granddaughters: Abby, Lianna, Caitlin and Meghan (Pat Godfrey). Ray was looking forward to the birth of his first great granddaughter. Ray was born on January 19, 1926 in Mineral Point, the son of Alphonse and Anna (Kieffer) Gevelinger. He is survived by his brother Joe, and sister Mary Stonner. He is further survived by many nieces and nephews and members of Eleanor's family, all of whom were very dear to him. He was preceded in death by brothers: John, Robert, Paul and Ed. He owned Beacon Furniture in Madison for 32 years until the business was destroyed by fire. He was also an auctioneer, inducted into the WI Auctioneer's Association Hall of Fame and honored by the National Auctioneer's Association. He had an opportunity to travel to many parts of the world and instilled an interest in travel to his family through numerous family vacations. Service was important to Ray. He served as a charter member of the Dodgeville Police and Fire commission, as well as the economic development committee and the library board. He was on the City Council for 6 years. We will miss his generous spirit. A Mass of Christian Burial will be celebrated at 11:00 a.m. on Saturday, August 4, 2012 at ST. JOSEPH'S CATHOLIC CHURCH in Dodgeville. Father Patrick Wendler will officiate. Burial will be held in St. Joseph's Cemetery. Friends may call from 4:00 p.m. until 7:00 p.m. on Friday at the GORGEN-McGINLEY & AYERS FUNERAL HOME in Dodgeville and from 10:00 a.m. until 10:45 a.m. on Saturday at the church. In lieu of flowers, the family would appreciate donations to the Dodgeville Public Library, Upland Hills Health or St. Joseph's School Trust Fund.

Dodgeville - Raymond A. Gevelinger, age 86, of Dodgeville, died unexpectedly, but peacefully on Wednesday, August 1, 2012 at his home. Ray is survived by Eleanor (McGraw), his wife of 58 years; his four children: Marcia (Don) Bastian and grandchildren:... View Obituary & Service Information

The family of Raymond A. Gevelinger created this Life Tributes page to make it easy to share your memories.