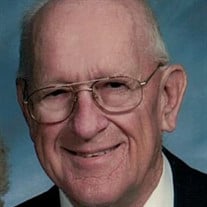 Dodgeville- Ralph Lawrence Schutte, age 78, of Dodgeville, WI, passed away Thursday, November 1, 2018 at Bloomfield Healthcare & Rehabilitation Center. Ralph was born January 7, 1940 in Beaver Dam, WI to Gilbert and Florence (Stegner) Schutte. Ralph attended Beaver Dam schools and graduated from high school in 1958. He worked as an assistant manager for Schultz Brothers Variety stores in several locations in Wisconsin. He joined the Army National Guard of Wisconsin as a member of the 127th Infantry in Hartford, WI. In 1961, he was called to service during the Berlin Crisis and was stationed at Fort Lewis, WA for six months. On June 29, 1963 he married Luella Cypher in West Bend, WI. They lived in Stoughton, WI for six months and then moved to Dodgeville when Ralph started a job as a sales representative with P. Lorillard Tobacco. He worked for them traveling all over southern Wisconsin for 38 years. Ralph was a people-person and loved talking to everyone, telling stories, jokes, and discussing the latest news. Always a salesman, he enjoyed selling produce from the family gardens at the Dodgeville Farmers Market for 30 years. He also believed in helping people and was a project leader for the Rockwell Mills 4-H Club and helped his wife and children with many 4-H activities over the years. He was a member of the American Legion Post 0097 and participated in Memorial Day services and funeral rites as a member of the Honor Guard. Ralph was a member of the Knights of Columbus Council 4871 for 52 years serving as the Grand Knight for a time, worked with the snowmobile derby and as the Tootsie Roll chairman for over 40 years. Ralph is survived by his wife, Luella; four children, Paul Schutte of Calumet, MI, Mary (Jim) Severson of Stoughton, WI, Ann (Tom) Dunn of Suffolk, VA, and Dale Schutte of Madison, WI; a brother Royce Schutte of Monticello, IN; sister-in-law Phyllis Schutte of Brookfield, WI; brother-in-law Vern Eulert of West Bend, WI; special aunt Dorothy Stegner of Beaver Dam WI; grandchildren Laura (nee Severson) (Nick) Gorden, Martin Schutte, Isabel Schutte and Gwen Dunn; as well as nieces, nephews, and cousins. He was preceded in death by his parents, Gilbert and Florence Schutte, parents-in-law Paul and Inez Cypher, brother Lloyd Schutte, sisters-in-law Virginia Schutte, Sharyn Eulert, and Arlene Cypher, and a grandson, David Severson. The family would like to thank the staff at the Dodgeville Dialysis Center for caring for Ralph for the past 4 years and the staff at Bloomfield for their care over the past few weeks. A Mass of Christian Burial will be celebrated at 11:00 a.m. on Wednesday, November 7, 2018 at ST. JOSEPH CATHOLIC CHURCH in Dodgeville, WI. Father Tfadzwa Kushamba will officiate. Burial will follow in the St. Joseph Catholic Cemetery with Military gravesite rites accorded by the Gomer Lewis American Legion Post No.97. Friends may call 4:00 p.m. until 7:00 p.m. on Tuesday at the GORGEN-McGINLEY & AYERS FUNERAL HOME in Dodgeville where a Knights of Columbus Rosary service will be held at 7:00 p.m. Friends may also call from 10:00 a.m. until time of mass on Wednesday at St. Joseph Catholic Church. In lieu of flowers, memorials will be used for the local dialysis center at Upland Hills Health, American Legion Post No. 97 and St. Joseph Catholic Church.

The family of Ralph L. Schutte created this Life Tributes page to make it easy to share your memories.

Send flowers to the Schutte family.